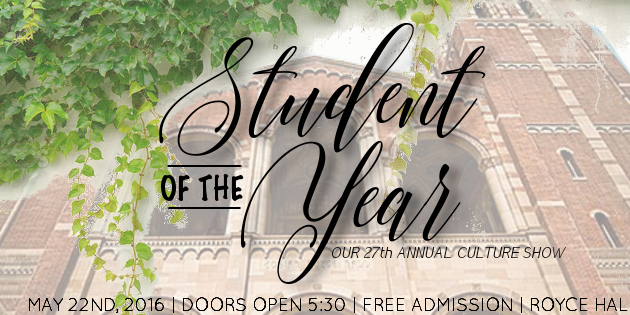 The Indian Student Union’s 27th annual culture show took place in Royce Hall on May 22 from 6:00-8:30pm. It comprised of different dances and an educational skit regarding bone marrow disease. The skit scenes were interspersed between the dances, making the show at once entertaining and educational. The skit was interwoven with traditional folk dances, modern dances, singing acts, and other musical performances. Each performance has a distinct lyrical charm that diffuses across South Asian diaspora.

It was fun to see how the colors and lights lit up the stage as the dancers embraced their culture. I got a chance to speak to one of the performers in the show, Zoya Chhabra. Zoya, is originally from India, but she came to the U.S to study at UCLA. She told me a little about her experiences with the ISU culture show. Zoya was a part of the Bhangra  performance, which is is a popular music genre that emerged  in the mid-to-late 20th century. Cultivated in two separate but interactive styles—one centred in South Asia, the other within the South Asian community of the United Kingdom—the newer bhangra blends various Western popular music with the original Punjabi tradition. It enjoys an immense following in South Asia and within the South Asian diaspora.

When I got a chance to speak with her about her experience, she said,  “It was really thrilling to perform in front of so many of my friends in Royce hall, especially because it’s a stage that so many incredible artists have performed on, and it was super cool because I’m Punjabi so it was nice to bring a little bit of my culture to UCLA.”

I also enjoyed the fact that the show also drew attention to the seriousness of various bone marrow diseases and the lack of South Asian donors in the bone marrow registry. After intermission, a representative from Asians for Miracle Marrow Matches (A3M) gave a presentation about what a donation of bone marrow entails. To learn more about joining the bone marrow registry and what the procedure entails, check out Be the Match and A3M.

As a proud Indian Bruin, I greatly enjoyed this show because it made me reconnect with my culture, and my friends. I feel like the ISU culture show fulfilled its primary duty of bringing the UCLA South Asian community together.