The Untold Realities of Being a South Asian Surfer 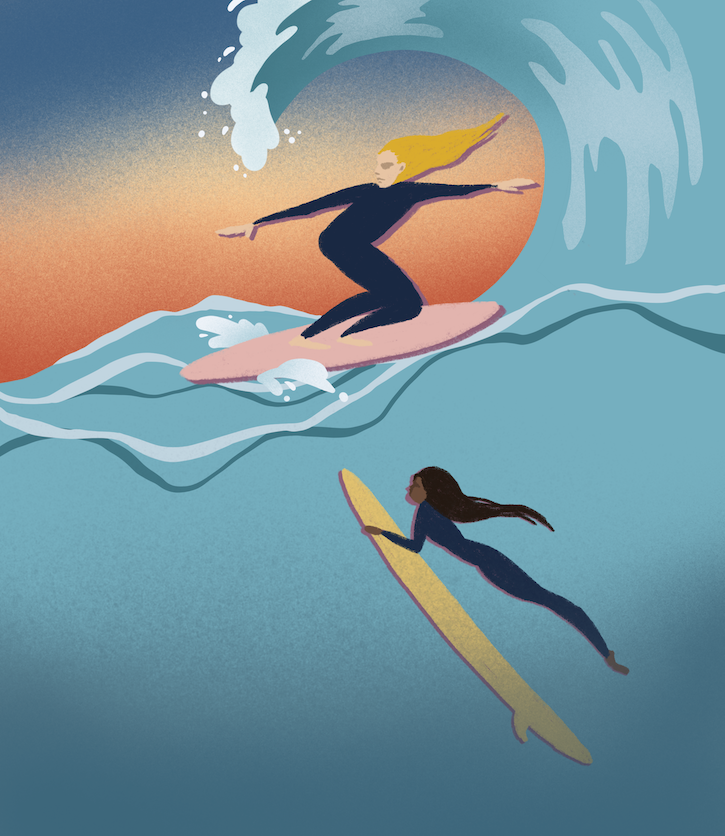 Paddling out into the endless blue, I smile as I enter my weekly escape. As I near the horizon, I realize I am the only girl and person of color in the lineup. A twinge of self-consciousness goes through me, but I quickly push it away as I paddle for my first wave of the session. It isn’t long before a guy paddles right in front of me and drops in, snaking my wave. When he paddles back out he shrugs at me, and looks at me with eyes that say, “What are you going to do about it? You obviously don’t belong here.” At that moment, I had the choice to either get upset and yell at him, or not give him the power to ruin my surf session. I caught a wave in and paddled out at a different spot where the crowd was much more welcoming.

I have been surfing for the past 5 years. It is one of my favorite things to do in the world. As a Sri Lankan American woman, I do not fit the stereotype of the average surfer’s appearance. I am often reminded of this when I am told that I don’t “look” like a surfer. I’ll admit that I also used to think all surfers looked like white guys with bushy blonde hair and sun-kissed girls with perfect bikini bodies. I found that this was not the case when I started surfing at the age of 14. The people I met in the water came from all kinds of backgrounds and were of various ethnicities. However, this fact is not represented in the way surfers are portrayed in the media. A recent example of this is the show “The Ultimate Surfer” that aired on ABC. There was hardly any diversity on this reality show, as the cast was predominantly white. This bothered me because it perpetuates the myth that surfing is a “white man’s” sport.

The underrepresentation of South Asians and people of color in surfing caused me to question my identity as a surfer when I first started. Imposter syndrome quickly set in and I felt that I couldn’t call myself a surfer even though I was going to the beach every week and having the time of my life. It was only when I stumbled across an article about the all-female surf club in Sri Lanka that this perception began to change. Watching these strong Sri Lankan women challenge stereotypes and gender norms empowered me to own and celebrate my identity as a South Asian surfer. Seeing surfers who looked like me in the media restored a sense of belonging in my heart that I continue to feel whenever I paddle out.

Incidents such as the one described at the beginning of this piece have led me to avoid certain surf spots. The Manhattan Beach pier, Doheny Beach and Dana Point are a few spots I avoid. I want to clarify that I am not saying these are bad places to surf, I just avoid them because of negative experiences I’ve had and stories I’ve heard. It bugs me that surfers who are people of color have to worry about whether they will or will not be welcomed when looking for surf spots. No one should have to experience imposter syndrome when surfing. The ocean doesn’t care what race you are or what you look like; it treats everyone the same. I hope that in the future, more surfers who are people of color will be killing the game and surf culture will change for the better.