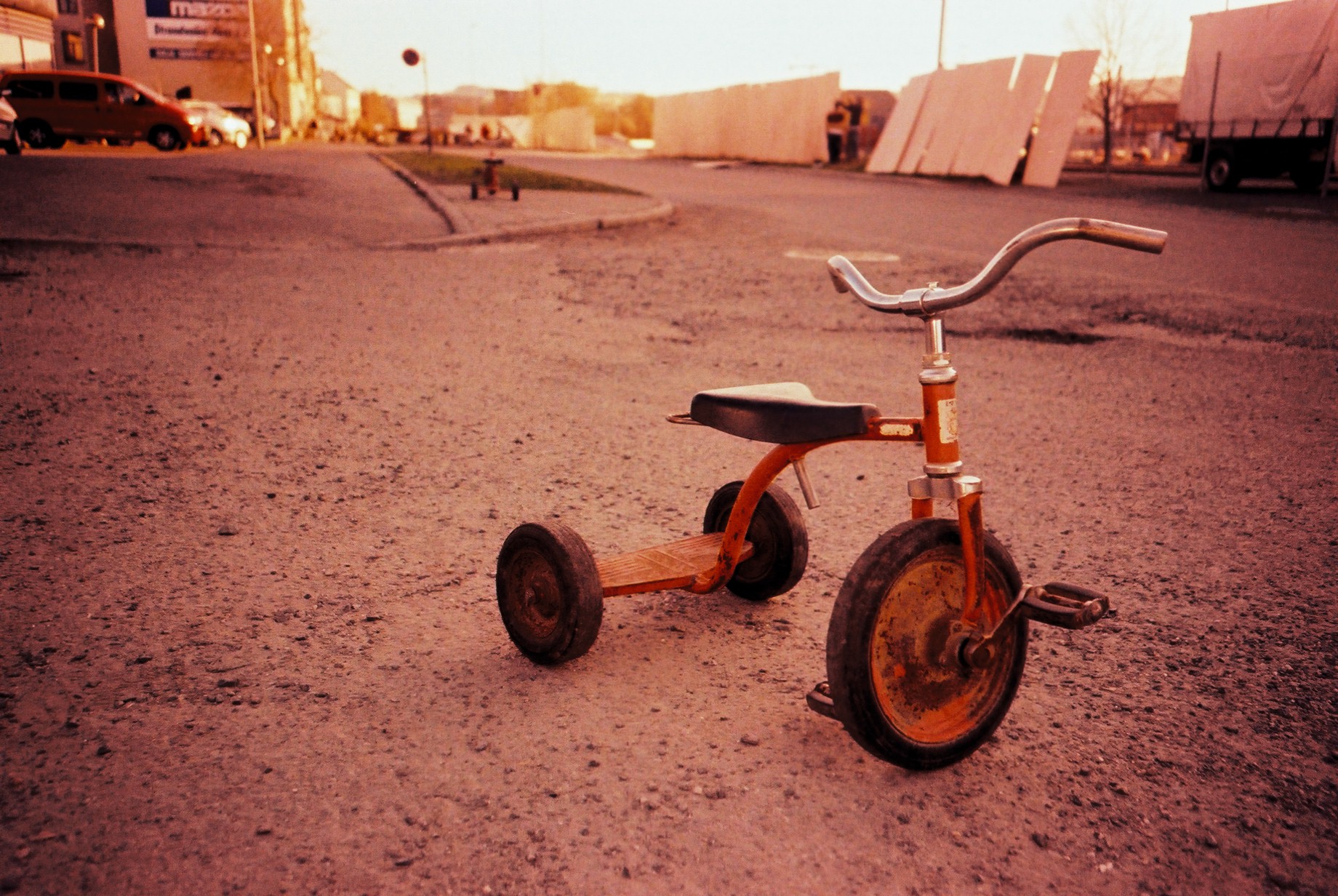 A city on the verge of no room for expansion, Taipei is basin living – that is to say, geographically, it is in a basin. But it is also a natural pot of smog-filled city, sinking beneath the weight of haphazardly stacked buildings, crammed to the brim with people and cockroaches and metros that we keep tunneling, like ants in an old hive with nowhere to go. The glamorous and not-so-glamorous ride the same transportation (buses and subways with metro cards loaded in 7-Elevens) and frequent the same streets, but with brand-name stores right next to family-owned street stalls, the mingling is not much of a surprise.

A block away from my grandparents’ apartment complex, there is a short man on a tricycle that stands (sits?) guard at the entrance of an underground parking complex. I visit Taiwan every four years; I pass by him so often he is rooted into my memories of home. He is as steady a constant as any other part of my bustling city. But at age three, I sit in a laundry basket smelling of detergent, as my cousins swing me between them.

They say his mother sells fruits to sustain them both. His beady eyes stare through me as we walk to the breakfast stall across the street (oyster vermicelli with pig intestines and black vinegar, 90 NTD; fried donut, 20 NTD). I avert my eyes quickly. I am reticent, scared of the man on the tricycle. The following week, my cousin and I stand in the back seat of a van as we travel to Kaohsiung. There are no seatbelt laws for passengers yet. We swing white thunder sticks at each other, melodic, dull thunks as they deflate over the course of a six-hour drive. I am garrulous, the flexible mind of a child chattering incessantly in Mandarin with no hurdle of language barrier nor complexity of speech.

The downpour of hot summer rain makes me wiggle my toes in my sandals. I pull a face while averting a dirty puddle and glance toward the parking garage. Nobody. I look up at the gray clouds of humid oppression. It is probably too rainy. But he is there the next day, when the skies clear to a brilliant blue that sticks my shirt to my neck. His hands grasp the tricycle handles loosely, shortened legs pushing back and forth, back and forth. My hand grasps my mother’s as we make our way to the 7-Eleven for a cup of caramel pudding. That night, my cousin puts a green plastic stool on her head – a paper windmill toy in one hand and a drumstick in the other – and marches around our grandmother’s tatami room singing loudly. Back and forth, back and forth.

I look at him with pity rather than fear for the first time. His hair is graying, skin weathered and brown. Everyone knows about his spot in front of the garage, about his old tricycle that no one is sure really works anymore, and about his eyes that look through you. I wonder about his mother and how cyclical her life must be. To wake up and live the same day at the same fruit stand seated on the same bright, plastic stool, consistently and without fail. But the world marches on. Since my last visit, the breakfast stall across the street has started serving smaller portions in smaller bowls (oyster pancake, 100 NTD; housemade sweet soy milk in a bag, 50 NTD). A new pseudo-American-college-campus restaurant for youngsters has opened down the street. In the afternoon, my grandmother sees that my skin had become very dark from band camp and comments that I don’t need to be so healthy. I try not to laugh and tell her that it was something I enjoyed, that our formations were actually very cool thank you, then try not to fall flat speaking through the lump in my throat, realizing I’ve lost the capability to express that in Mandarin.

I didn’t see him anymore. I hear that his mother passed. There is a hollow feeling in my chest –- emptiness, a space created from a selfish sense of loss. What am I mourning, if I had nothing to mourn? I feel discomfited by the lack of closure, as if he was a character from my imagination. A figure of constancy to me. I wonder where he could go, what he would do. The thing is, Taipei is always different when I visit. A compact city that still somehow grows, an expansion and contraction of entropy in its confines of basin living. The only other constant left is the hotel with pink walls (that I only realize now is a love hotel) a couple of streets down. And still, its ground floor is renovated to accommodate the nice cars of sleazy men.

I take the metro alone for the first time to Breeze Plaza, an upper-crust shopping mall, and meet up with a friend that is also visiting home. It is our last summer of constants. We walk into the two-story Louis Vuitton within the mall, clad in unbranded shorts and shirts. We take pictures at the obnoxious glass bridge crossing the third floor, then are lured over to the overpriced soda machines with Pokémon designs on them. The central area is bustling with buskers, and I look out at the families walking around. My friend and I will soon leave for college. But right now, I link my arm through his, and we stroll toward the festivities.

Featured image: “Tricycle” by aslakr is licensed under CC BY 2.0