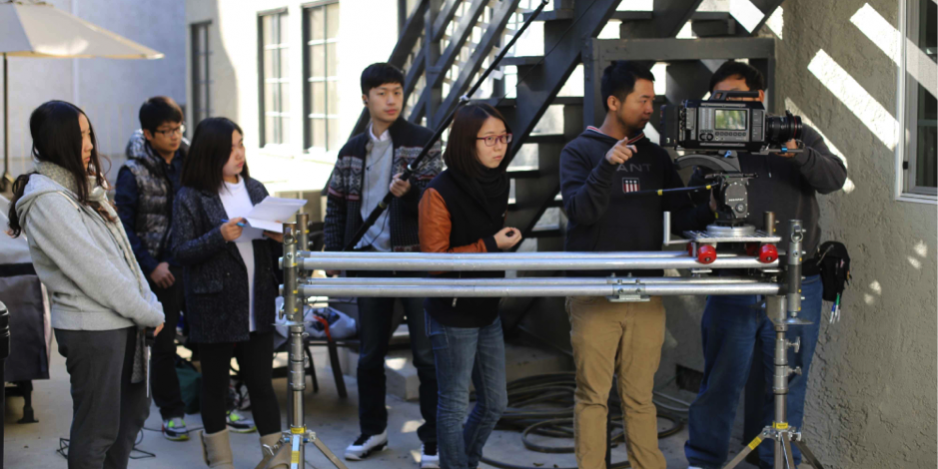 International Student Film Association (ISFA) is a student-initiated group at UCLA. The group was founded by Yirou He and Xinkai Zhao in 2012. The club is composed of graduates and undergraduates of UCLA who are interested in exploring the film production. With its numbers of projects, ISFA has been awarded and recognized by both on-campus and off-campus organizations. The slogan of ISFA, “Don’t Dream It, Film It” illustrates the strong passion of the team toward the film production.

I spoke with Yujie “Krystal” Jiang, who is the president of International Student Film Association and a third year political science major at UCLA. Through her involvement in ISFA, she is developing her career in entertainment business.

1. What is the major purpose of the club?

ISFA is a student organization that leads the student to pursue their passion especially in film industry. Our group believes that there is no limit to imagination and we all got the right or power to expand that. We would like to educate and inspire anyone who’s interested in filming and assist them in fulfilling their dreams in film without requiring them to go to film school. We want to break the exclusiveness of filming industry and prove that even without the professional education, we can still make professional films. (Laugh) So, ISFA is here to support you to explore your passion in film.

2. Who are the members of the group?

There are about 300 members in the group. If I were to count only the active members, there are about 50 of them. Even though the group is an “international”, most of the active members are American Chinese or Chinese. We are now trying to promote to the broader and more international members. Anyone interested in film is more than welcome to join us.

3. What are the major jobs of members?

There are two major divisions in our jobs. A group that actually shoots the film and another group that edits those films. For the shooting, there are directors, scriptwriters, props managers, production manager, and so much more. For the editing, it involves most of the technical parts. We do not let a single person take the specific job for every projects. We rotate the jobs by getting volunteers for each project. This is because we would want to train the newcomers and give them the opportunity to learn the jobs. It is indeed important to come up with high quality film. However, the more important thing for us is to inspire the passion of the students in film and explore the beauty of imagination.

4. How do you recruit the members?

We usually use social media and flyers to promote our group. You will be able to see us at Bruinwalk during the recruiting season (laugh). We also invite our friends who are interested in filming. It is basically opened to everyone!

5. How does the casting process work?

Casting is one of the most important parts of film production, too. In casting, we upload our project to a website called Film LA, which is a major casting website here in LA. We get to meet great actors and actresses through this website. We audition those people who applied to the projects. This audition process sometimes gets very competitive.

6. What kind of films do the group shoot?

We usually shoot a short film that is usually 10 to 15 minutes long. There are no specific boundaries in determining the themes. Love, passion, academics, entertainment, family, culture… There is no limit. We all, as the members of the group, suggest the themes for the upcoming projects. Sometimes, we get to have clients both from the school and the outside of the school. If it is from the school, we usually shoot the advertisements that promote a specific events or a group.

7. What are some challenges that the group faces?

I guess the financial problem is the major challenge that we face (laugh). In order to come up with films with better quality, we need more and better equipment in shooting. We try to use what we already have. However, we still have to borrow some of the equipment from the renting center near in Westwood. Not only that—we need the props and places to shoot the film. In this process, financial problem is always an issue. We sometimes face technical problems too. We sometimes invite students from UCLA’s School of Theater, Film and Television (TFT) to open a workshop for the club members. We really appreciate their help. However, we cannot always have them in the editing process. Then, technical problems sometimes become an issue for us.

8. What are you currently working on?

ISFA is now working on promotional film for the show held by Chinese Students and Scholars Association (CSSA). It is a very exciting project.

9. What is the future prospect of the film production?

We are planning to focus on exploring wider cultures in this international school. It will be very interesting to learn more about different cultures. It has not been finalized yet, but we are planning an on-campus film festival. It will be open to everyone. We hope to promote more about the group and also the film industry itself too.

Check out the list of films ISFA has produced below:

Life Game is the film that received about 150,000 views on youku.com

大梦 (Bid Dream) is the Chinese production that won us the CCTV (China Central Television) Dream Contest. The members of ISFA composed and sang the song themselves.

Dream House (2014) is a trailer of one of the film that is still under process of production.