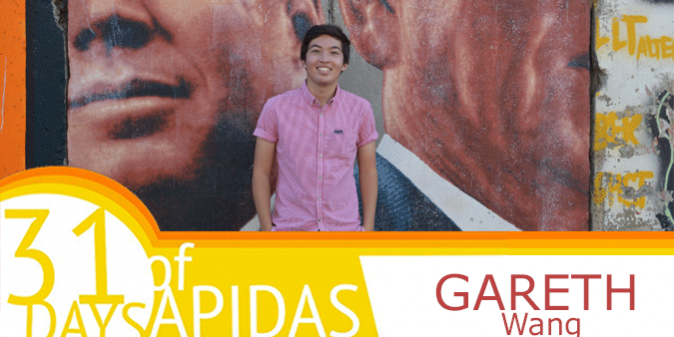 Gareth Wang is a second year geography and pre-International Development Studies major who is actively involved in Association of Chinese Americans and Mixed Student Union at UCLA. He’s a fan of encouraging people’s differences and mint chocolate chip ice cream.

San Carlos, California, which is in the Bay Area. I’m from the peninsula, which is 30 minutes south of San Francisco.

I wanted to go to a big school in an urban area because I came in undeclared so I wanted a lot of options in choosing my major. I love being in Los Angeles and California, and there wasn’t a big incentive for me to go to the East Coast. The campus really stood out to me, it was so beautiful the day when I came to visit. It’s more diverse as well; I was initially excited that there was a big API population here. I grew up in an area that is predominantly white so I was excited to come here.

I work in the Bruin Resource Center, I’m part of an alliance in the BRC called Alliance for Intergroup Dialogue (AID). We are trained in dialogue facilitations so we host dialogue workshops for student organizations on campus like sororities and fraternities, and also Res Life and clubs. Our workshops promote cultural communication, talking about social identities, and conflict management.

I got involved with USAC because I’ve always been pretty interested in politics but I never really envisioned myself as someone involved with student government. It was not something I did in high school. I applied to a lot of things my freshman year because I was not involved so I was fortunate to get into USAC. I work for the Gen Rep 3, Anais [Amin]. We went on a retreat this past year and it was one of the most transformative experiences of my life. It was inspirational to hear stories of people overcoming obstacles despite facing systematic oppression, it was really empowering. Now maybe I might want to get involved in government in the future. This one experience really transformed what I see myself doing in the future.

I’m a part of MSU (Mixed Student Union), I’m on their executive board. I’m also in ACA (Association of Chinese Americans) as well. I’m not a big part of that though. I’m in this group called a Project CAPHE. What we do is we go into Chinatown and help low-income students through the college application process. The group hasn’t been particularly active but I’ve been to a couple events. So the one event I went to we went to Chinatown and we helped students and parents fill out the FAFSA.

For myself, I really want to grow MSU into a really prominent organization on campus. That’s one of the reasons I did this interview. I wanted to bring a mixed perspective into the APIDA month because being mixed is the primarily lens through which I live my life. It was not something I had the opportunity to explore or be a proud of and it was not something I was cognitively aware of growing up. It was important to me to be exploring identity holistically and breaking myself down into my parts, and treat myself in a holistic manner and someone who has multiple racial identities.

The cultural groups at UCLA do not get along. Particularly the mother orgs, there’s a lot of disagreement. It’s sad to see in the past, there’s been bickering debate over who gets to belong in this org. I want to encourage solidarity between cultural groups so as people of color we can form a unified block to pressure admin as a whole. A lot of that stems from dissonance from who belongs where. At MSU we’re all about encouraging difference, because we’re all different. Our club has a lot to offer in terms of bridge building and how we can bring cultural orgs together through our shared identities to improve solidarity. That’s what I’m passionate about.

God, there’s so much stuff going on all the time that I would love to be a part of. I would love to be a part of ACA more. They’re a huge organization and they have so many components. They’re definitely trying to be more politically active and I really admire the way they run their club. I love BCC (Bruin Consent Coalition) too, I’m a big fan of them. Low-key Pac Ties too, y’all are awesome. I love to write and love that there’s a space for APIDA voices.

Yes, many. So first of all I mentioned MSU, and challenging the monolithic conception of APIDA. The primary way I’m doing that now is raising awareness about mixed identities. I’m also very passionate about the model minority myth and challenging what it means to be APIDA. A lot of what I see happening in terms of a data there’s a lot of controversy in disaggregation and how the data about financial and economic well being certain APIDA groups hides the struggles faced by southeast Asians from less economical parts of Asia. Southeast Asian and PI are socioeconomically and educationally are equivalent to Latino/as. I’m looking to challenge what it means to be APIDA.

There are overwhelming issues with a lot of groups. There’s ambiguity over what is and what’s not tolerated. For example, being at the diversity caucus, with Vice Chancellor Jerry Kang, someone brought up that evangelical preachers, but Chancellor Kang said that as a public university it’s a public space for them to do that. Afrikan Student Union (ASU) has to advocate to the chancellor with a list of demands and only then do we get an email from him. When there are other events there’s automatically an email from the chancellor. Some things require pressure and some things don’t. I think the university having a firm stance on all forms of intolerance and discrimination would contribute a lot to making a better campus climate. I would like an institutionalized form of funding for cultural groups rather than applying for funding, creating institutional platforms shows admin cares about diversity of students. Something that is not tenuous and questionable whether there is space on campus for us.

I love everywhere. I love the spot between Royce and Powell. It’s always so beautiful there. I love the Kerckhoff nap room, in the upstairs lounge; I’m a big fan. The sculpture garden is really nice too.

Academic counseling was legendary to be honest. I’m the type of person who likes to try and do things on their own especially academically but I was like no way when I tried to do this. I actually went to make sure what I was doing was right not for help, just to check in. It was so helpful my counselor, Angel, he planned out my next couple of years. He went with me to see if I could double major and minor, and helped me find which classes overlapped and it was opening a new world. It made me feel much more confident about accessing other resources on campus and have been more confident. Also CAPS because everyone should take advantage of that, and even though they’re struggling financially they have a lot of workshop. Everyone needs to take care of their mental well being.