Yes, We Play Jazz Too: 8 Asian-American Jazz Artists You Should Know About 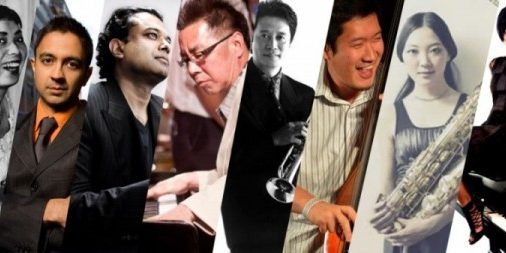 April was Jazz Appreciation Month, a month to celebrate the history and heritage of this uniquely American genre. I am an occasional jazz trombonist: I’ve played in jazz bands, combos, Latin bands, and dance bands since I was 13, but have mainly focused on classical trombone. As the years go by, I keep coming back to the same question: where do Asian-Americans like myself fit into the identity of jazz? Where do we fit into this wide category of music that has its roots in African and African-American traditions, yet has been a source of both conflict and coalition in black/white relations? I have yet to find a satisfactory answer, but in the meantime, here are eight Asian-American musicians who are kicking ass in jazz.

Akiyoshi was born in Manchuria and grew up in Japan, where even into the 50s, there were only dance halls to play in and very few venues where people would come to listen exclusively to jazz. In 1952, she was discovered by American jazz pianist Oscar Pederson, who recommended that producer Norman Granz record her. Four years later, she moved to the United States to study at Berklee College of Music. Her accomplishments include: forming The Toshiko Akiyoshi Jazz Orchestra featuring Lew Tabackin in Los Angeles with her husband, saxophonist/flutist Lew Tabackin, recording 22 albums with the orchestra, 14 Grammy nominations, and being the first woman to place first in the Best Arranger and Composer category in the DownBeat Readers’ Poll.

Vijay Iyer grew up in New York state with Indian-Tamil parents. He played classical violin as a child and was mostly self-taught on piano. He studied math and physics at Yale, where he didn’t get into the orchestra and began playing the piano in the dining hall instead. He intended to continue studying physics at UC Berkeley, but two years into his doctorate he created an interdisciplinary PhD program for himself called “Technology and the Arts” based on “the study of how music works, not just in the abstract but in our bodies. How we do it. How we hear it.” The following selection is just the tip of the iceberg of Iyer’s talents: his career spans from being a Grammy-nominated recording artist to composing for the Silk Road Ensemble to being the artist-in-residence at the Metropolitan Museum of Art.

Iyer’s collaboration with trumpeter Wadada Leo Smith, A Cosmic Rhythm With Each Stroke, was released on March 25, 2016.

Rudresh Mahanthappa is an Indian-American saxophonist and composer who was born in Italy, grew up in Colorado, studied at Berklee, and is currently based in New York. He has many collaborations with pianist Vijay Iyer, who is Indian-American as well. Mahanthappa’s music blends jazz music, electronic music, Indian music, and many other styles. For example, his 2013 album Gamak is named after gamaka, the technique of melodic ornamentation in North and South Indian music. The album has elements of Indian music, Chinese music, Indonesian gamelan, progressive rock, folk music, heavy metal, and many others.

Jon Jang brings elements of Chinese heritage into jazz in a way that tastefully stays true to both traditions. The title track of his 1983 independently produced album, Are You Chinese or Charlie Chan? refers to the yellowface detective movie character Charlie Chan in its title, but talks about the murder of Vincent Chin in the chorus. His album, Paper Son, Paper Songs is about Americanizing Chinese people and Chinese music: his paternal grandfather changed his surname from Hu to Jang in the 1890s in a “paper son” arrangement, while “paper songs” refers to melodies that look like Chinese folk songs on paper, but sound American when played, drawing a parallel to his own American-born Chinese identity.

Video Feature with the Chinese Culture Center of San Francisco

Quote from a 2006 interview from That’s Beijing: “In November 1997, the Jon Jang Sextet performed at the Beijing International Jazz Festival at the Poly Theatre. At the beginning of the “Butterfly Lovers,” James Newton, a distinguished professor of ethnomusicology at UCLA, performed a sensitive flute introduction depicting the butterflies floating down and around the flower. The audience applauded in disbelief at Newton, but then when I transformed the piece by placing the melody underneath a backbeat, the audience could not accept it, probably because they have been so used to the orchestral version by Chen Gang and He Zhanhao.”

Toru “Tiger” Okoshi was born in Ashiya, Japan in 1950, the year of the Tiger. As a child, he was a painter, but after seeing Louis Armstrong on a tour in Japan at age thirteen, he took up the trumpet and began to study jazz. In Japan, he graduated with a degree in commerce and got married. He and his wife bussed across the United States on their honeymoon and decided to sell their return tickets to remain in Boston, where Okoshi attended Berklee College of Music. Since then, he has performed with the Mike Gibbs Orchestra at Carnegie Hall, toured the US with the Buddy Rich Orchestra, started a fusion group called “Tiger’s Baku,” and is currently a teacher at Berklee.

Yasushi Nakamura was born in Tokyo in 1982, grew up in Seattle, and is currently based in New York. He began playing the clarinet and tenor saxophone at age eleven, and bass at age fourteen. Nakamura studied at Berklee College of Music and the Juilliard School, and has played at the North Sea Jazz Festival, Carnegie Hall, and Monterey Jazz Festival.

‘Tea for Two’ with the Yotam Silberstein Trio

The last two artists on the list are young LA-based musicians. Check out their local shows and show your support!

LA native Connie Han graduated from the LA County High School for the Arts and just released an album last December called The Richard Rodgers Songbook. She performs extensively in LA; has performed and toured with artists like Antonio Hart, Monica Mancini, Bob Mintzer, Bobby Militello, Bob Sheppard, and Walter Smith III; and has performed both locally and abroad with the Connie Han Trio. Check out her upcoming performance dates here.

Hitomi Oba is a UCLA alumna who graduated with a MA in Music Composition and a BA in Ethnomusicology/Jazz Studies. She currently teaches music theory at UCLA (Music 20ABC). She has two critically acclaimed albums, First Flight and Negai, numerous multi-disciplinary compositions ranging from electro-pop to jazz opera, and is part of the new music collective, LA Signal Lab. Most recently, was selected to write for the Buffalo Symphony Orchestra as part of the 2016 Jazz Composers Orchestra Institute Readings. Check out her upcoming performances here.