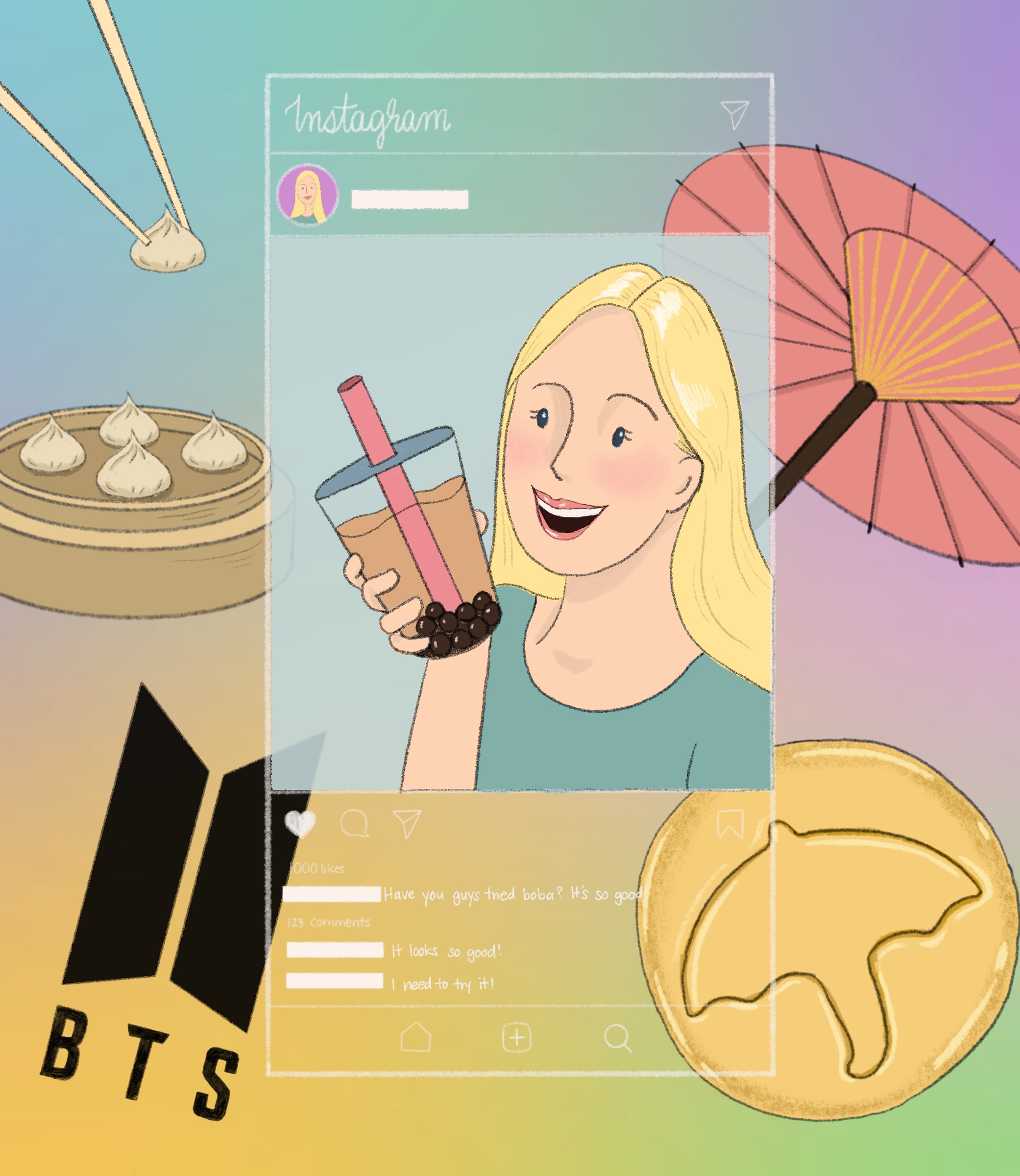 Blue light radiates from my phone to my face, and I bask in the glow as it breaks the darkness surrounding me. Over time, I’ve sort of developed this habit: every night, no matter the hour, I enter the endless cycle that is scrolling through Instagram. I know, I know. It’s not the best thing to do, considering how it inevitably turns me into a mindless, sleep-deprived zombie in the mornings. However, it was during this task that I found something that alerted me from my half-asleep state.

It was this girl from my high school, holding a rather familiar drink. We were sort of friends in that way where you only really interacted to check if you did the homework assignment right, or when the next test was scheduled. Nevertheless, we still followed each other. It wasn’t her that made me stop and stare, but where she was. She was at a boba shop that I’ve been going to since I was a kid! No, this wasn’t anything particularly newsworthy, but having attended mainly white-dominated schools most of my life, anything that was part of my Asian culture almost felt as if it was a secret to me. I was used to people asking me questions about the food I bring to school or some of the clothes I would wear, things that were familiar and comforting to me but strange and foreign to them. So to me, it was a bit of a surprise.

This got me curious. I am not proud to admit it, but I did some Instagram stalking on her profile after that. Hey! We all do it, so no judging. In picture after picture, I saw her engaging in activities from eating dimsum and going to Chinese temples to carrying around a wagasa. She would post her thoughts on the latest Asian shows, movies, and songs, and share how excited she was for APIDA Heritage Month and Chinese New Year. I’m all for representing and sharing Asian cultures, but there was one issue: she wasn’t Asian.

I’m not saying there’s anything wrong with exploring and enriching your knowledge about other ethnic groups and their customs, but I felt a little strange watching someone else who didn’t understand the history of Asian cultures put so many posts up about them. It just didn’t feel like her story to tell. I’ve known and loved all these things since my childhood, but what is perceived as cool now was strange back then.

This is because Asian pop culture is making its way to mainstream Western audiences. For example, the rise of Asian fascination can be attributed to K-pop groups like BTS, which was named the biggest recording act in the world by Forbes, or shows such as Squid Game, which became Netflix’s number one show of all time according to an article by Variety. Both of these have resulted in even more people wanting to hop on the bandwagon. However, this has led to the misconstruing of Asian customs and cultural appropriation. People would mix and match different cultures with vastly different heritages.

Many people don’t want to focus on the history of their newfound interests as that may be too long and too boring, but rather just want their aesthetics. This has resulted in controversial fashion trends such as fox-eye makeup or mandarin collars in everyday shirts and dresses. Many don’t realize that the famous mandarin collar is actually from a traditional Chinese dress known as a qipao, which is supposed to be for formal or semiformal occasions, or that those of Asian descent can feel offended by white celebrities trying to make a faux narrower eye shape “cool” while they themselves were bullied for having the actual natural look.

For years growing up, I never felt like I belonged because of my dark hair and almond shaped eyes. I was constantly paranoid that the food I loved and brought to school would smell too bad to the other kids. While I am happy to see more of my culture being shared in a more favorable light, it is a little bittersweet that the stories they hold are not accurate or from the actual people that have had these customs their whole lives. From celebrities to the girl on my Instagram, this can lead to misconceptions of Asian customs. It is because of issues like these that I want to find ways to share my culture as well as others’ in an appropriate fashion that hopefully everybody will be able to understand someday in a way, without misconstrual or misinterpretation.