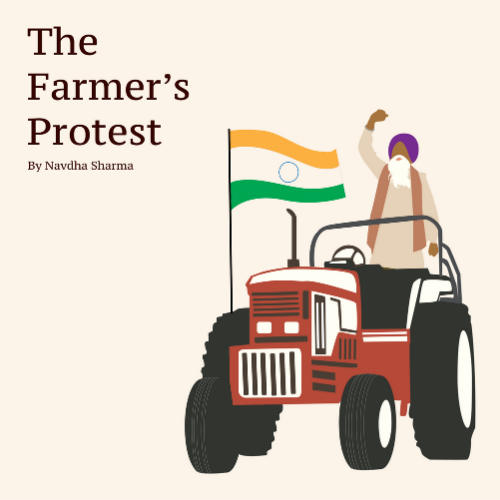 The crops swaying in the wind,

The gushing canal watering the fields,

Waking up at the crack of dawn,

Tending to the fields, without complaining,

It was December 5, 2020. I was supposed to catch a flight to the US from New Delhi along with my family. But while stuffing our clothes into huge suitcases, we were simultaneously glued to the TV screen looking out for possible roadblocks on the way to the airport. The farmers’ protest had recently and rapidly escalated, and the farmers had moved to more rigorous methods of showing their dissent like roadblocks.

The farmers’ protest in India: the largest protest in the history of the world. It started out as a show of resentment towards Farmers’ Produce Trade and Commission Act that was passed by the Indian government in September 2020. Previously, farmers had to sell their goods via an auction held at their respective states’ Agricultural Produce Market Committee. Under these laws, the farmers were guaranteed to receive at least the minimum price that was agreed to by the government. Thus, by offering fixed minimum prices to farmers for crops, the Indian government helped create a stable platform for investments for the crop cycles. However, the new laws passed by Prime Minister Narendra Modi’s government have dismantled this officially mandated system. They allow the farmers to sell their crops to anyone at any price. Though the government argues that this would allow more financial freedom to the farmers and allow them to sell to grocery chains without a middle man, farmers feel that this would enable big and well-established agribusiness companies to drive down prices.

According to estimates, 200 million people have participated in the protests in India. While this number seems extraordinary at face value, it is not a surprise considering farmers make up about half of the workforce of the country. The protests began in the states of Punjab and Haryana. Initially, the farmers demonstrated their anger at the laws by burning crop residue which they usually clear out. In late November, the farmers began marching towards the capital, New Delhi. Near the edges of the city, they were met by tear gas and water cannons to prevent them from entering. Millions of industrial workers from industries ranging from banking to transportation to telecommunication services and even oil and natural gas companies also joined the protestors to show their solidarity. Throughout the first week of December, the government and the protesters met to discuss possible negotiations but no consensus was reached. On December 8, 2020, opposition leaders like Chief Minister of New Delhi Arvind Kejriwal were detained for supporting the protesters under direct orders from the Prime Minister. The biggest blow came when the farmers organized a tractor rally that disrupted the Republic Day celebrations held near the Red Fort, a historical landmark in New Delhi, with one of the protesters losing their life. As a sign of paranoia on both sides, farmers alleged that he had died after being shot by the police, while his death was found to be an accident when the tractor he was driving overturned. Internet services were suspended in certain parts of the capital to prevent misinformation and sensationalist news from spreading.

The farmers’ protest has captured international attention after teen activist Greta Thunberg shared a link to a “toolkit” which seeks to educate people worldwide about the protests and the reason behind them. The toolkit called for an open mind from the Indian government while dealing with this matter, and also mentioned Twitter hashtags which could be used to support the farmers. Additionally, it asked people all around the world to help organize protests in India on February 13 and 14. On February 13, the Delhi Police arrested Disha Ravi, a Fridays for Future (FFF) activist, in connection with the toolkit. The Delhi Police claims that the toolkit has pro-Khalistani notions and a separatist nature, as it strongly backed the protests. The Khalistani movement is a Sikh separatist movement that seeks to create a homeland for Sikhs by establishing a sovereign state, called Khalistan, in land that currently forms the state of Punjab in India and Pakistan. The Sikhs are a religious community who predominantly inhabit northwestern India. As far as the toolkit controversy is concerned, the truth is probably in the middle: while the activists fell for a ruse by Khalistani elements to underhandedly influence a genuine movement, it is also true that the Delhi Police came down on activists with unnecessarily harsh action.

The fact that the laws were passed without consulting the farmers’ union makes us want to support the protests, but one should be vigilant while doing so. Having an opinion in favour of or against the Indian government with regards to this issue is up to each individual, but it should be kept in mind that there are several groups who might want to take advantage of the anarchy. A quick resolution of this matter is in everyone’s best interests; it seems increasingly unlikely, however, as neither the farmers show any signs of backing down, nor the government a willingness to negotiate.