The Laundromat: A safe place to unload your secrets? 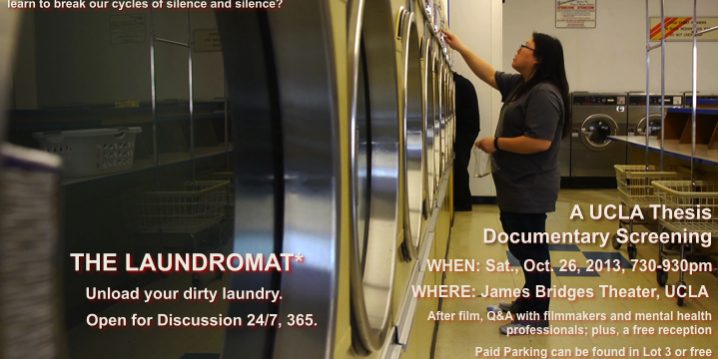 Last Saturday, October 26, the James Bridges Theater of UCLA screened The Laundromat, an award-winning documentary on the stigma of mental health problems and its silence within Asian American cultures. Vanessa Yee, graduate from UCLA with a MFA in Production and Directing, started the film project four years ago. The documentary follows the personal stories of her friends who dealt with depression, isolation and the inability to voice their concerns to their friends or family. In a personal submission to Hyphen news magazine (2011), Yee shares what the film sought to explore:

“I was only planning to be the dogged interviewer … in search of an answer to, What does it mean to break your silence? … I talked to three of my friends who had each experienced depression and great loss, but were learning to seek counseling and air their dirty laundry.”

However, in the midst of editing the film, Yee felt something was lacking: “How could I make a documentary about dealing with personal pain and cultural stigma without also asking myself the same questions?” Struggling with the inability to talk about her own depression with her parents, Yee decided to include herself as a subject in the film. As a result of placing herself in a vulnerable position, Yee was able to produce a more intimate and cohesive film.

During her time in college, Yee learned the news of her mother’s pancreatitis and hospitalization. She noticed that her family kept the knowledge of her mother’s condition to themselves. No one outside of their immediate family was aware, and Yee was afraid to tell anyone because no one talked about these things, and there must be a reason behind this silence.

According to Yee’s research, depression isn’t seen or acknowledged to be a real problem by many Asian American families (especially first generation immigrants). A second generation Asian American student at UCLA shares a time when she opened up to her mom about her depression. Her mother brushed off the issue as if it were a matter of choice:

This disbelief in mental health problems and the prolonged silence plays a big factor in furthering those affected into a deeper state of isolation and emotional distance from others. Yee chose to explore mental health through an Asian American lens because of the cultural pressures to keep silent. They are not to talk about personal or family problems in order to “keep face” and not shame – or stigmatize – the family. Yet, through the process of filming and the characters sharing their stories with Yee and the camera, the documentary reveals how opening up and sharing these secrets with others can become part of the healing process. Yee’s friends were able to talk about their experiences and the pressures and self-harm that result from trying to protect the reputation of the family.

After the screening, there was a Q&A panel for audience members to ask questions and discuss the implications of the documentary. Carol Miyake, member of the panel and a counselor from Asian American Christian Counseling Service (AACCS), discussed the film’s significance. Miyake states that she believes the film has great potential to open up discussions about mental health and create a more safe and accepting space within Asian American communities. More importantly, she says it is a profound way for family members and professionals to discuss nuances such as generational gaps and shame-based cultures that can lead to mental health problems.

Due to practical reasons such as the length of the film, the documentary is limited in its coverage, lacking a larger array of perspectives. Though the film offers no concrete solution to the problem of silence and mental health, the film does offer various ways to deal with the problem: counseling, finding a supportive community, opening up to the camera, and/or revealing the secret to a family member. In her personal experience, Yee says that her community and network of friends were able to support her through her depression.

Interested in learning more about how to help those in isolation with little support, I raised the question:

“What about people who can’t find a community? Aside from counseling, where can they find support?” I knew a friend who had received peer counseling and even professional counseling, but none of it was effective or beneficial according to him.

Yee replied: “To be honest, I just got really lucky to find this community and support.”

I knew it was a hard question, one that hadn’t been looked into or researched enough. Yet, the documentary is a big step in opening the door for more dialogue and exploration on the issues of silence and the near absence of resources addressing the root of mental health problems. Counseling continues to be the immediate and favored solution, or coping mechanism, to alleviate those who experience depression and related mental issues.

Although the documentary is unable to capture everyone’s stories, Yee is currently working on an interactive website (atthelaundromat.com) for people to form a community and have a place to share their ‘dirty laundry’ secrets and stories. Yee states her intention for the website is “to create a safe place for the Asian American community to speak on why we are like this, [and to] come clean about the secrets and shame we hide in the Asian American community.”

Interested in watching the documentary? You can follow the film’s production blog for news of upcoming screenings: http://thelaundromatdocjourney.wordpress.com/.

Without further ado, here’s the trailer: