Passage of DREAM Act would add $329 billion to economy 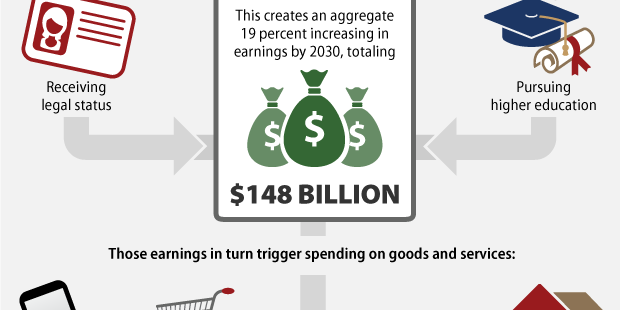 The Center for American Progress released a report on October 1st that found that passage of the DREAM Act would add $329 billion and 1.4 million jobs to the U.S. economy over the next two decades.

Introduced in 2001 by Sens. Orrin Hatch (R-UT) and Richard Durbin (D-IL), the Development, Relief, and Education for Alien Minors (DREAM) Act would provide a path to citizenship for people brought to the U.S. at a young age. To be eligible for the DREAM Act, a person must have arrived in the United States at age 15 or younger, be 35 or younger, been present in the country for at least five years, attended high school, and completed at least two years of higher education or military service.

The DREAM Act passed the House of Representatives in 2010, and achieved a majority of votes in the Senate. However, it fell five votes short of achieving cloture, which would have allowed a simple yes-or-no vote on the measure.

The Center for American Progress used data from the American Community Survey from 2006 to 2010 in order to calculate the number of eligible unauthorized youth. Numbers were calculated using a model of likely education and job attainment of eligible DREAMers to estimate their future earnings. Factors considered in this model were education level, age, sex, race, and ethnicity.