Is Baltimore a Protest or Riot? 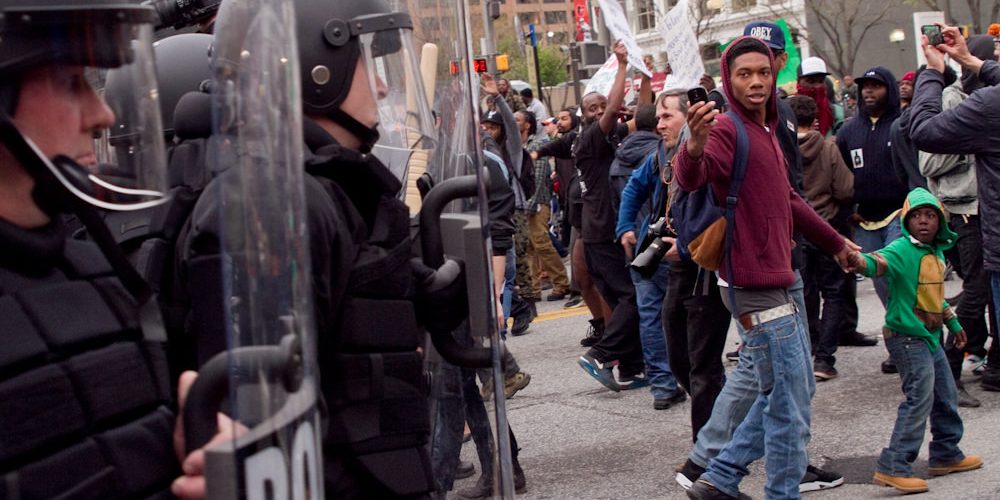 How we call what is happening in Baltimore will affect how we perceive people who commit acts of violence to draw attention to their oppression. If language choice matters, then choosing between the word protest and riot in media headlines will sway public opinion about the unrest in Baltimore.

It has been found that, when speaking about an issue, the language choice can influence a person’s perception of the topic. For example, politicians in opposition of estate tax refer to it as the death tax because it emphasizes the idea that a person is taxed because they have died, whereas politicians in favor of estate tax want to emphasize that it taxes the estate after death. This minor distinction in wording has rhetorical consequences, and people’s opinions can be influenced by a small name change.

Authoritative figures can utilize linguistic cues to develop propaganda for their agenda. For example, in the film The Hunger Games: Mockingjay Part 1, character President Snow wants to stop the uprising that has gained in momentum and numbers. During the development of a speech to condemn the uprising, Snow says, “I won’t say ‘rebels.’ These are senseless acts of defiance. I won’t legitimize them.” In response, his assistant Egeria says, “We’ll call them criminals.” Snow chooses to criminalize the rebels in the same language that public leaders have done when speaking about Baltimore.

In every case where the African American community protested against police brutality, the media has called them riots:

An NPR piece points out the hypocrisy that people believe instances of police brutality are isolated and do not apply to police officers in general, yet all black people are held responsible for any violent acts committed by individuals that are part of the black community.

Even within the UCLA campus, folks are assigning blame in regards to Baltimore. The Afrikan Student Union’s bulletin board, Campbell Hall, and other locations have been defaced by stickers about Freddie Gray. According to Daily Bruin, some stickers said, “If only Freddie Gray had followed the damn law, he’d still be alive” and others said, “Stop whining and start following the goddamn law.” In response, comments on stickers said “fuck the police.”

So, what should we call Baltimore? In an NPR piece by Karen Bates, the terms civil unrest, uprising, rebellion or riot become dependent on who you’re asking. There are two camps of thought according to Bates: 1) those who call the demonstrations a “resistance to authority or control,” and 2) those who recognize that the protests reveal “simmering resentment and honest anger” to the oppressive conditions that poor black communities face.

In either case, the media and even officials like the Baltimore mayor and Obama frame it as senseless violence. Obama said there was “no excuse” for this kind of behavior, that “it’s a handful of people taking advantage of the situation for their own purposes, and they need to be treated as criminals.”

Those who criminalize unrest stemming from systematic oppression should realize that they are criminalizing victims of inequities. It is troubling that these media messages will shape how the rest of America perceives what has happened in Baltimore.

**An earlier version said that Rodney King was beaten on the intersection of Florence and Normandie, but that was actually Reginald Denny. It also said that Rodney King was beaten to death, but he actually survived the injuries. Lastly, Darren Wilson was never so charged, even though a previous version said he was found not guilty. These corrections have been reflected in the piece.