You are here:
Monthlies 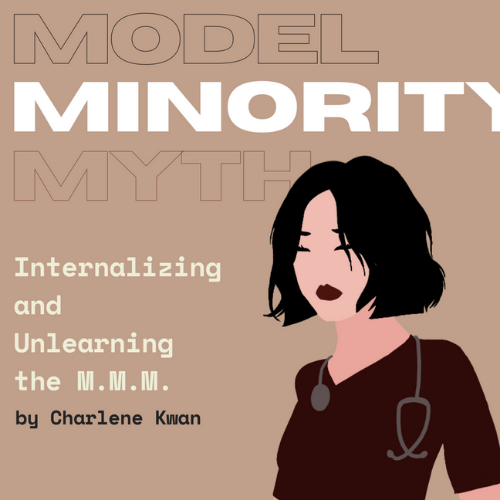 Officially, the model minority myth is the belief that all Asians are naturally high achieving. Unofficially, it meant that my childhood was a constant barrage of jokes about having to go to Harvard and become a doctor or lawyer. It meant stepping into a room and knowing that people already made assumptions about me and what type of person I was.

The model minority myth means grouping Asian Americans into a monolithic culture of work and work ethic, and conflating Asian-ness with fitting the MMM, rather than cultural markers. It means diminishing and even standardizing racism against Asian-Americans while pitting them against Latinx- and African-Americans, feeding into the myth of American meritocracy and sowing racial division.

The model minority myth, in practice, looked like getting constantly ignored in discussions, but being the first person people raced to compare themselves to as a benchmark. I was introverted as a child, but I leaned into it as people, and teachers specifically, stopped checking in on me and started expecting that I just knew everything already.

My senior year of high school, a classmate I’d shared classes with every year since sixth grade asked me what my last name was. On other occasions, he regularly called me by my Asian friend’s name, despite the fact that we looked nothing alike and both saw him every day. Despite this, he never had an issue recognizing us when he wanted to work together– her in math, me in history. The flippant nature of his recognition of us– recognition only when it suited his ends– exemplified the toll that almost two decades of being subjected to the model minority myth had taken on me.

The model minority myth limited other people’s conceptions of who I was. Growing up in a majority-white suburb with no one to tell me otherwise, it grew to limit my perception of myself as well. People told me my whole life that what defined me was being smart and shy and ambitious, and that message bounced around my head for so long I started to parrot it back. I internalized the model minority myth so much that it went beyond just believing it– I started putting pressure on myself to live up to it, for both myself and other people. How could I look people in the eye and disappoint them? I had a reputation to uphold after all. The shame I felt being less than the best in anything was unbearable.

After eight years with the same cohort of people and the weight of their growing, building expectations, we went our separate ways.

I came to UCLA and for the first time, I wasn’t one of three Asian faces within a crowd. Stepping into a lecture hall and seeing only black hair and pale faces wasn’t something I had thought to prepare myself for coming into college. It was overwhelming. Within my classes, on my freshman floor, in APIDA organizations I joined, I met diverse groups of people all lumped under the umbrellas of “Asian” and “Asian-American.” These people proved to me that Asian-ness was not synonymous with one narrow definition– how could it, with thousands of us here?

What does unlearning of the model minority myth look like? It looks like challenging preconceived notions– all of them– because I understand what it feels like to have someone else’s image of me so forcefully imposed. The tenderness with which we learn to treat ourselves with through unlearning the model minority myth can be applied to other minoritized groups as well. Our racial histories of oppression are different, but the experience of feeling like an “other” is the same.

It means being kinder to myself and listening to what I want, to give myself the ability to voice my own desires. It means letting go of the harmful ideas I used to have, of what I should be, of what other people thought I should be. Asian-Americans shouldn’t decide en masse to not become doctors because people expect that of us, but we should dig deeper and question whether we actually want it or have just been conditioned to want it and believe it’s our only option. Allowing ourselves to consider

It means understanding my own experiences in the context in which they occurred– rather than dismissing my childhood self, understanding that the people and places around me shaped the person I assimilated into. The work ethnic my parents instilled in me is not colored by the work ethic I took on to fit expectations that were imposed on me.

The harmful imposed ideas of what it means to be Asian can be divorced from a more personal and more prideful joy in my culture, heritage, and the state of being bicultural in America. Being Asian-American means recognizing that the two sides of your identity are not mutually exclusive. You can be both Asian and American, and revel in the uniqueness of both.

Yusra is a fourth-year English major and Education Studies minor at UCLA (Class of 2022). In addition to being a copy editor for UCLA's Pacific Ties Newsmagazine, Yusra is the Executive Editor of Creative Nonfiction for UCLA's Journal of the Arts: Westwind. When she is not working or studying, she enjoys binging shows with her friends and running her meme pages.