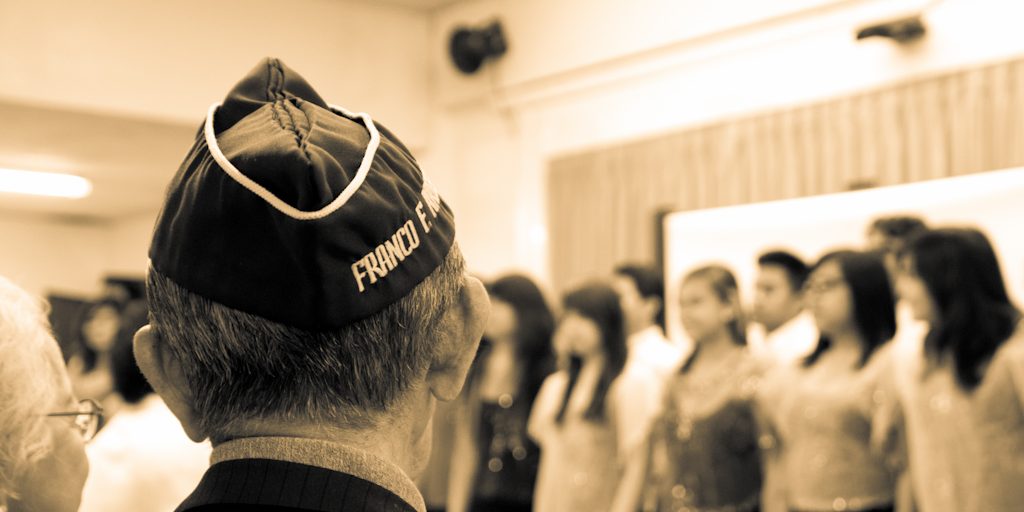 World War II conjures many words and places to mind: Pearl Harbor, Manzanar, the beach of Normandy, Hiroshima, perhaps even the 442nd Regimental Combat Team, the all-Japanese American team that emerged from the war as the most decorated regiment in the U.S. Armed Forces. Lesser known, however, are the Filipino and Filipino American veterans who also fought alongside the U.S. Army. Among these veterans–or veteranos, as they are referred to in Tagalog–was Stephanie Uy’s grandfather, who joined the U.S. army. Because the Philippines was a commonwealth of the U.S. before and during WWII, Uy’s grandfather (and other Filipino soldiers), was legally an American national, and was promised citizenship and veterans’ benefits. When the war ended, however, Uy’s grandfather received neither. The Rescission Act of 1946 denied Filipino veterans these benefits, claiming that the U.S. had already paid two hundred million dollars to the Philippines after the war. Today, the Filipino veterans remain not only uncompensated, but unrecognized as well.

Stephanie Uy, a fourth year Asian American Studies major and Urban Planning minor at UCLA, didn’t know about the Filipino veterans’ role in WWII, or the denial of their benefits, until she came to college. Although her grandfather would always tell her stories about his involvement in the war, Uy says that she “never really put it together” until she came to UCLA and joined Samahang Pilipino. Through Samahang, she learned about Justice for Filipino Veterans (JFAV), a national organization that campaigns for Filipino veterans’ benefits. JFAV was formed through People’s CORE–a non-profit organization that seeks to train the Asian Pacific Islander community in advocacy–in 1998, and began campaigning in 2000.

Although JFAV is a national organization, it is centered in Los Angeles, because that is where the movement for Filipino veterans’ benefits started. Every year, there is a rally and a march that begins in Historic Filipinotown, a march that includes not only the Filipino veterans and members of the JFAV campaign, but other college students as well. According to Arturo Garcia, the national coordinator for JFAV, the campaign seeks to do grassroots outreach and connect with different communities, from college students to immigrants’ rights groups. Uy was not able to attend the rally her first year at UCLA, but has attended every year since, and urges her friends to go.

Michelle Lapitan, a fourth year Asian American Studies Major and Community Projects Coordinator for Samahang Pilipino, also participated in the march this past November. She drove the veterans who were unable to walk in the rally. When asked about the experience, she said, “I was really happy to be with the veterans because I was just hearing about how they felt, how they wanted just to be recognized for the work that they did. It seems like such a little thing to be recognized for the work that they did, but it’s taken them so long.” Lapitan said that it was also inspiring to see so many different Filipino organizations at the rally, because they were all so passionate for a cause that affects them all.

For Uy and Lapitan, involvement in JFAV is not only about compensation for the veterans, but about recognition for the work that they did as well. The lack of knowledge about Filipino veterans’ involvement in WWII is reflective of the general lack of knowledge about Filipino contribution to U.S. history in general, according to Lapitan. This lack of recognition hurts, and is even infuriating. Uy says, “I was pretty pissed off [when I found out about the veterans]. And then to make that personal connection…[that] my grandpa was denied his own benefits, I was really angry. I was really compelled to learn more about struggle and to get people involved.”

The JFAV campaign is even more more urgent now, as many of the Filipino veterans have passed away, including Uy’s grandfather, whom she never had a chance to talk to about her involvement in JFAV. As these veterans pass away, it is not only the momentum of JFAV that is threatened, but the knowledge of the veterans’ involvement, a piece of U.S. history that may be forgotten permanently.


Error: API requests are being delayed. New posts will not be retrieved.

Error: API requests are being delayed for this account. New posts will not be retrieved.