You are here:
COMMUNITYEVENTS 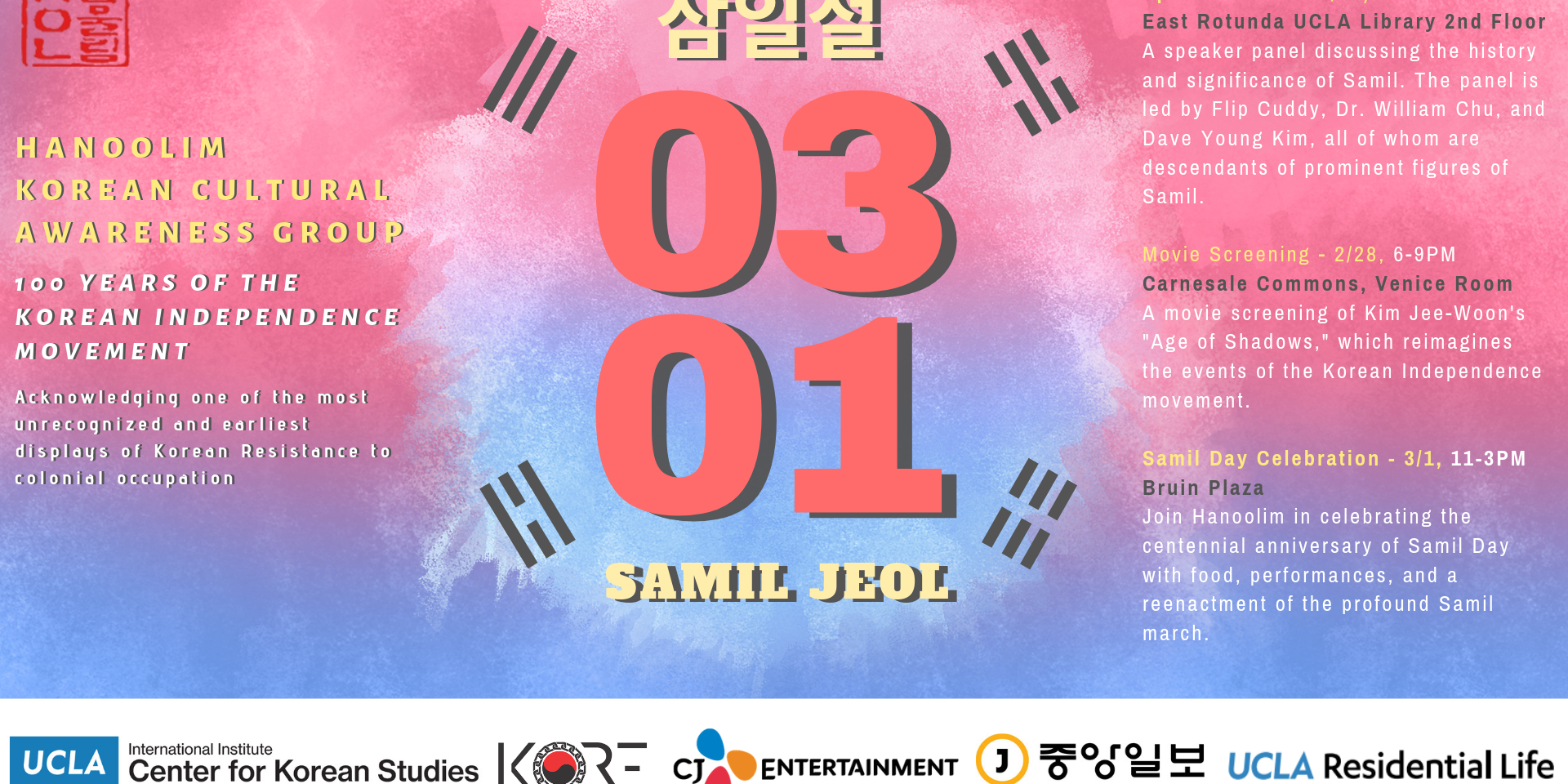 From Wednesday, Feb. 27th to Friday, Mar. 1st, ​Hanoolim​, the Korean Cultural Awareness group at UCLA​, will host a series of events, including a movie screening and guest speaker panel, to celebrate the centennial anniversary of ​Korea’s Independence Movement, Samiljeol​.

Samiljeol, also known as the Korean Independence Movement Day, is a public holiday in South Korea dedicated to ​a series of historical protests against Japanese imperialism​.

One of the first notable demonstrations was the March First Movement in 1919. It started in Seoul but quickly spread to the rest of Korea. Hence the word “samil” in Samiljeol, which literally means “three one.”

According to Elaine Shin, a third year at UCLA and the External Vice President of Hanoolim, the group hopes to commemorate Samiljeol by inviting everyone to learn more about Korean history and culture through three days of informative and fun activities.

On the first day, Hanoolim will host a speaker panel where the audience can hear from folks who have direct ties to the movement such as: Flip Cuddy, the grandson of Korean Independence activist Dosan Ahn Changho and the son of ​Susan Ahn Cuddy;​ Dr. William Chu, son of Chu Yo-han who was one of the participants of the ​1919 Korean Proclamation (Declaration) of Independence​; and artist ​Dave Young Kim​, a descendent of Yu Gwan Sun and one of the main participants of the March First Movement. Needless to say, there will also be a Q&A section that will allow audience members to ask questions.

Thanks to strong connections to its alumni, Hanoolim has been able to assemble this panel, and Shin expressed that the group is truly fortunate to have found these remarkable speakers.

On the next day, the movie Age of Shadows (2016) will be screened at Carnesale Commons, Venice Room from 6-8:30PM, with a post viewing discussion.

Last but not least, on the final day, Hanoolim will set up information booths in Bruin Plaza about Samiljeol for everyone to visit, along with tables of food serving Dakgangjeong (sweet, crispy Korean fried chicken), Kimbap (Korean rice rolls), and Ggul-tteok (sweet Korean rice cakes). On the stage, there will be a series of performances by Hanoolim’s Poongmul team and Talchum team, who will perform traditional Korean drumming and mask dancing respectively.

Hanoolim will also hold a peaceful, mini march at 2PM starting in front of the steps of Kerckhoff Hall. The march will be a reenactment of the March First Movement and will end in front of Janss Steps.

In spite of recent diminishing membership, Hanoolim is nonetheless committed to bringing more awareness about Korea and the Korean community. Because there has been a lack of remembrance and education of Korean histories in American textbooks and even in Korean American families, Shin hopes that through the upcoming celebration of Samiljeol, Hanoolim will help “put Korea on the map” and better inform communities.