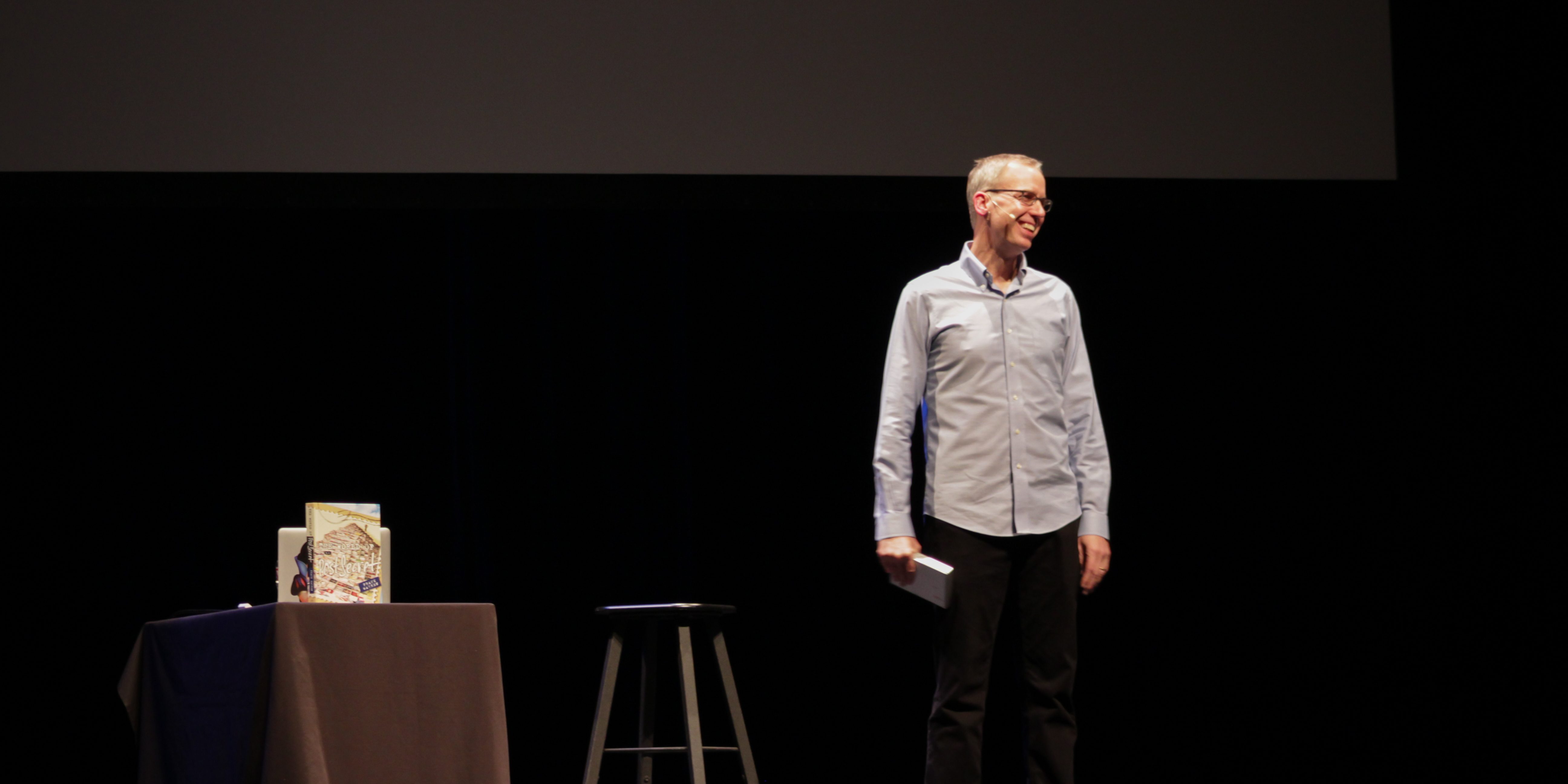 Royce Hall was nearly full and Frank Warren stepped out on stage to an audience screaming and clapping on Jan. 28. He welcomed everyone to PostSecret with blank postcards and the question, “Are we keeping secrets? Or are they keeping us?”

PostSecret was created by Frank Warren, a man who started to give random strangers postcards to fill in with anonymous secrets. He hoped to receive at least three hundred back. He now receives hundreds of anonymously written secrets to his home address every day and posts them on his website for everyone to see. It began as Warren’s personal art project and became a global community project. People all over the world participate in Warren’s project by sending him secrets or browsing through the website.

PostSecret’s sixth book, “The World of PostSecret,” as well as a winding exhibit called “What’s the BOLDEST thing you’ve ever done?” greeted guests at the terrace reception. Here, intimate secrets about everything from family, sex, empowerment, and adventure were displayed. The night was breezy and cool: the perfect weather for a performance about poetry, spoken word, and secrets.

Frank Warren was so excited to be at UCLA and the audience loved him. It was an eclectic mix of college students and adults whose ages ranged from eighteen to sixty. Most of them had been following Warren and his PostSecret blog for several years, waiting every Sunday for him to post ten new secrets.

Warren began by taking the audience through some of his favorite secrets on an interactive slideshow. Warren always started off with a main picture or collage; afterwards he zoomed in on other pictures, usually screenshots of postcards, and proceeded to tell the story behind each secret. People have been mailing him secrets on standard postcards for the past nine years, telling him things that are deep and profound, but also silly and casual.

Known as the “Most Trusted Stranger in America,” he is probably also America’s kindest stranger: within a minute of being on stage he gave away his latest book to a volunteer in the audience.

The night started like a stand-up comedy show. Warren shared how people have become more creative and send him secrets on seashells, In-N-Out bags, and even a bag of coffee with a secret that reads “Where I work, they don’t keep inventory.”

Funny secrets (apparently the most common one submitted is “I pee in the shower”) were expertly woven through with some more serious ones. Warren did not shy away from topics about mental health, grief, abuse, and loneliness. He announced that “suicide is America’s secret, but it’s the most preventable death in the world.” The PostSecret website and its community have raised over one million dollars for suicide prevention.

At the end of the night, Warren invited the audience to come forward and share their thoughts on the evening and on PostSecret. Many people thanked Warren for creating a platform for people to share their secrets and connect with others. Some people even chose to share their secrets publicly. It was an emotional night but still everyone was laughing with tears in their eyes.

One UCLA student thought Warren was “an incredible speaker in the way he was able to control and manipulate the crowd’s mood and emotions with just a few words—he was incredibly calm and charismatic.” While the student did not consider PostSecret to be “exactly life changing,” she thought “the event overall was pleasant [and made people] feel good.”

Frank Warren was incredibly genuine as “America’s most trusted stranger.” The PostSecret event at UCLA was inspiring and thought-provoking. After a long day of work and classes, it was the perfect event to attend. When the audience left Royce Hall, they each had a blank postcard in their hands, courtesy of Warren.

Whether they had been following Warren and PostSecret for years, or had just learned of it tonight, they now had the opportunity to fill out a postcard of their own and potentially end up on the PostSecret website on Sunday. Warren revealed that the word “secret” in Hebrew translates to “come closer.” Perhaps, in this case, secrets are meant to bring us all together instead of hiding away in our hearts.