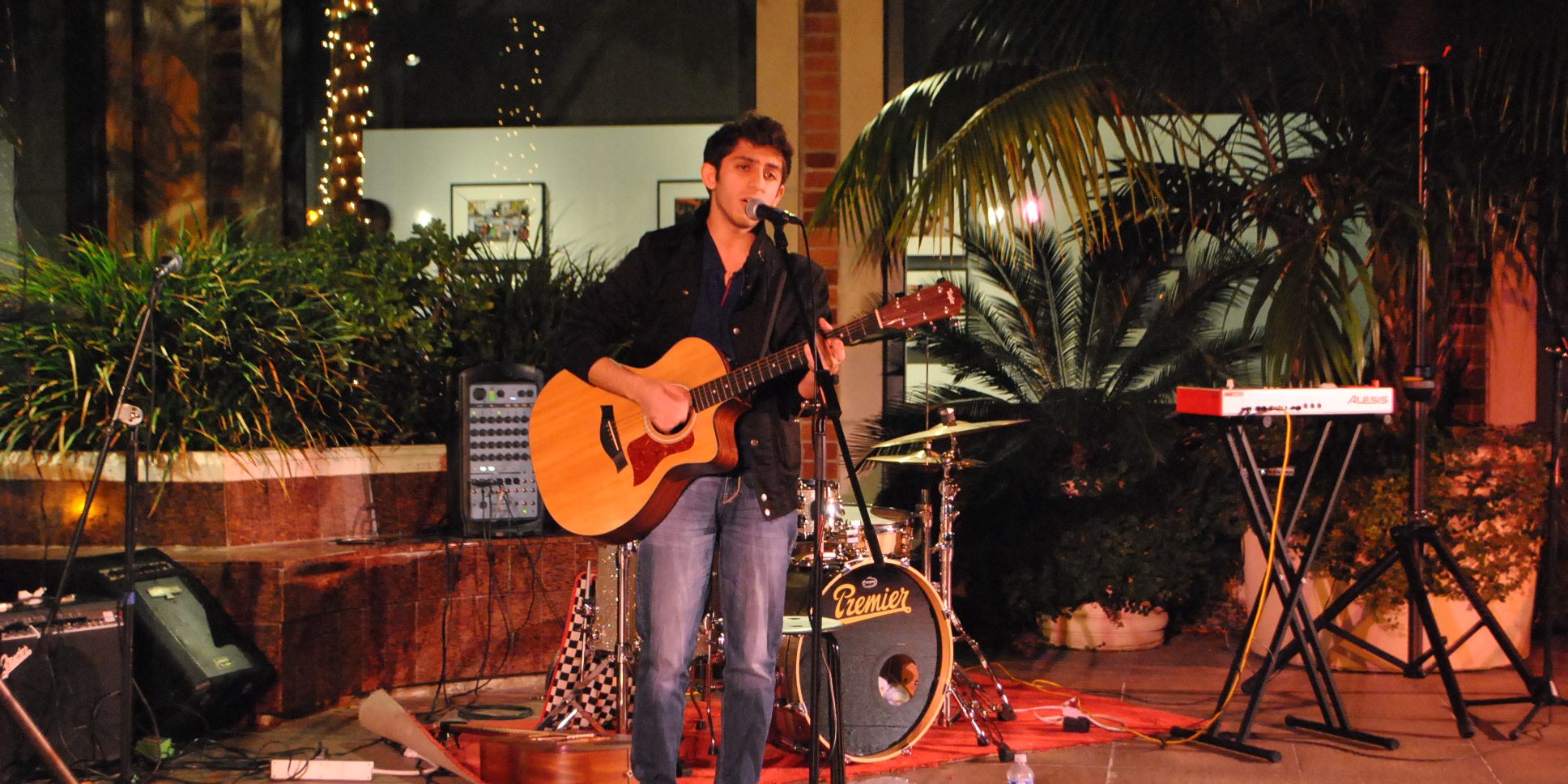 With stringed lights twinkling above the Fowler Museum courtyard and colored spotlights illuminating the stage, Raunak Rupani entered with his two guitars, smiling at the crowd.

Last Thursday, the Fowler Out Loud concert series hosted two diverse musical acts. To open the night was +Adam, a fusion and spoken word band inspired by the riot grrrl movement. Their third-wave feminist inspiration and college experiences trickles in their music with dominating song titles such as “The Woes of Tinder” and “Woman of the Year.”

Second-year Rupani followed with his smooth serenading voice and mellow guitar. Rupani brought an interesting twist to the night as he revealed he was going to sing songs in Hindi, Japanese, and Mandarin Chinese.

He opened with an acoustic mashup of “I Can’t Feel My Face,” “Cool for the Summer,” and “Lean On.” Revealing that this was his first time performing in Chinese, Rupani sang a Mandarin song “You Exist In My Song/ 我的歌声里,” originally sung by Wanting Qu.

After a few pop mashups and a Hindi song, he closed the night with a Hindi/Japanese/Taylor Swift medley, which he revealed in the middle of it that he was just making it up as he went along.

Rupani, who learned to play the guitar at age 13, found his musical inspiration from his parents and friends. His parents, who are also recreational singers, created an environment in which Rupani felt connected to. He also spoke about his passion for traveling, and how visiting different countries showed him how beautiful other languages are.

“Most of my friends are from different places so I try and learn a little bit, because music is the easiest way to connect to anyone, because everyone likes music, right? But if you can connect to them in their language, it’s instant, no matter where I go, who I talk to, I’ll always have a friend somewhere,” Rupani said.

Currently, Rupani is an Honors student pursuing a Business Economics major and is involved with Bruin Investment Banking and Moneythink.

Rupani hopes music will have an influential path in his future because he believes it helps him academically and professionally.

“Music is, and always will be, a big part of my life. Without it, I can’t really be ‘me’ – I feel like I would lose a part of myself if I stop playing. Music is what got me interested in management consulting in the first place. I look at economics in the way that I see music,” said Rupani.

“A musician changes the notes and instrumentation to create a perfect harmony. Similarly, as an aspiring consultant, I would have to consider the different factors that come into making a decision for a business problem, in order to give the best advice possible. Although music and consulting are practically very different, I believe that, at their cores, they seem to have a certain degree of similarity,” Rupani said. “The entire idea for learning to sing in other languages is to face difficult challenges and overcome them. Music connects all of us, and singing in someone else’s language allows me to connect to them better.”