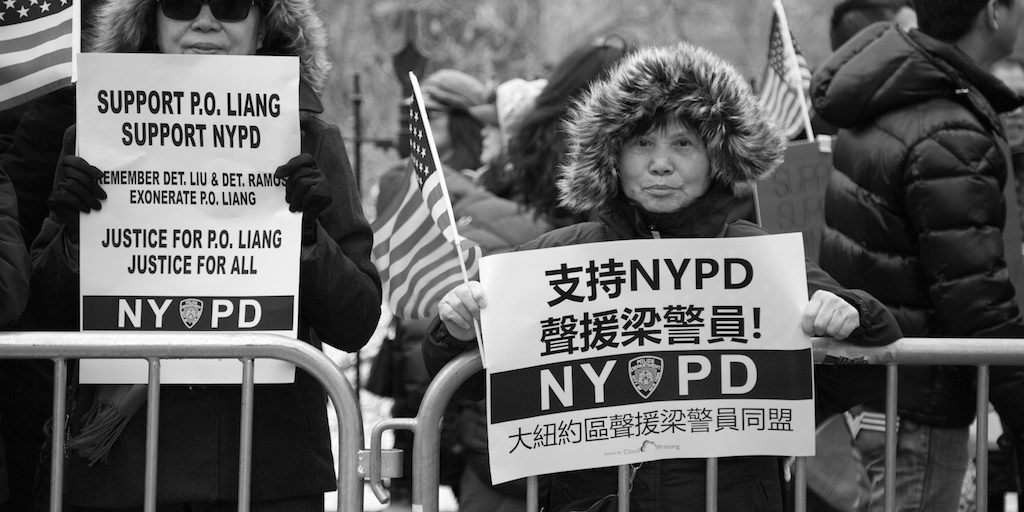 (Photo above by Tina Leggio via Flickr Creative Commons)

But Liang’s actions were reckless and therefore justly convicted. The protesters see Peter as a “scapegoat” for quelling the anger of communities that are dissatisfied with police brutality.

But this only perpetuates white supremacy, which allows the justice system to dehumanize black lives.

Even though Liang is a rookie cop, he should be accountable for his actions as a trained law enforcement officer.

Liang wrongfully shot Akai Gurley, an unarmed black man, who was walking with his girlfriend in the stairwell of a housing project.

A police officer’s job is to save lives, not to take them.

Protesters held signs that read, “One Tragedy, Two Victims,” suggesting that Liang is also a victim of racial bias because the justice system did not fairly convict white officers who killed unarmed black people.

The Chinese American Liang is the first NYPD officer in over a decade to be convicted for such crimes.

But to argue that Liang is unjustly convicted because the justice system is lenient toward white officers overlooks the fact that Liang directly caused someone’s death.

The only victim in this case is the person who died. It is crucial to acknowledge that the death of Akai Gurley is not an isolated incident, but it is rather an example of police brutality.

A Chinese American woman said that the protesters are not asking for white privilege and are deeply sorry for the Gurley family during the protest, according to Fusion.

Yet, it sounds like the protesters want Liang to be afforded the same privileges that are given to white officers when they demand so-called “justice for Peter Liang.”

One way for Asian Americans to assimilate into the dominant culture of whiteness is to actively participate in systems that oppress other marginalized groups.

Protesting Liang’s conviction, at the expense of Akai Gurley’s life, perpetuates the idea that some lives are worth more than others.

That sends the message that an Asian American’s life is worth more than a Black American’s life, in the same way that white supremacy holds that white lives are more valuable than the lives of people of color.

The superficial sympathy expressed by the woman in the Fusion video, in which she claims that Asian Americans are deeply sorry for the Gurley family, doesn’t cut it.

We, as part of Asian Pacific Islander Desi American (APIDA) communities, have to remember that injustices have occurred in the black community.

We must also look within our communities to address anti-blackness because it is deeply entrenched in our culture.

There are members of our community that are anti-black because Asian Americans have been presented as the “model minority” to other oppressed groups, such as the black community, in order to prove that individuals in the US can be successful if they just worked hard enough.

Although the model minority myth is posed as a positive stereotype, it is harmful. The myth continues to divide communities of color, which prevents coalition-building to fight against systemic oppression.

We must remember the legacy of APIDA activists, such as Yuri Kochiyama and Grace Lee Boggs, who supported the black power movement. They worked alongside black activists such as Malcolm X and James Boggs, respectively.

Without the Civil Rights movement, there would be no Immigration Act of 1965, which allowed many Asian Americans and others to immigrate to the US.

Before that, Asians were excluded from migrating to the US because of xenophobic views and the racist perception that Asians were too culturally different.

It is our responsibility as allies, as people of color, to fight for justice when injustices occur in other marginalized communities.

To be in solidarity with the #BlackLivesMatter movement, the first step is to look internally by addressing antiblackness in the APIDA communities.


Error: Access Token for pacifictiesmag is not valid or has expired. Feed will not update.