Dancing into the Hawaiian Culture 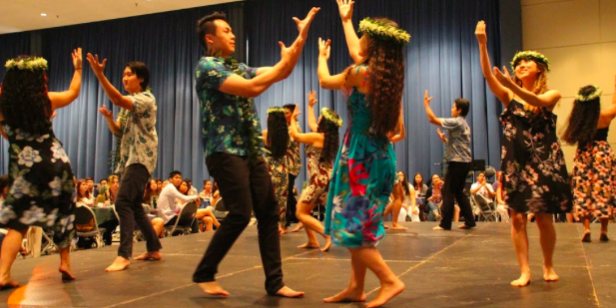 Four years ago, Erin Murashige joined Hui O ‘Imiloa – Hawai’i Club at UCLA, hoping to ease homesickness as well as continuing to practice Hula, a traditional Hawaiian dance she has learned since she was four years old. Now president of the club, Erin says that it has about fifty to seventy members that actively engage in various activities.

Hui O ‘Imiloa’s environment can be best described by one word — Ohana, which means family in Hawaiian culture.

“What you put into it is what you get out of it”, says Erin, “[we want to] be able to share the culture with people who aren’t from Hawaii.”

A majority of the members are neither Hawaiian nor familiar with Hawaiian culture, but they join with open hearts to learn about this new culture through dancing and eating traditional food. In fact, Erin did not anticipate the fact that one day she would lead people from different backgrounds to learn a new cultural dance they had never performed before.

Alongside Erin, a professional choreographer is hired to teach Hula and the members have the chance to practice from Sunday to Thursday.

On another note, members are never demanded to dance in order to join Hui O’Imiloa.

“It is a cultural club, with dance being one of the aspects”, says Erin.

The club also provides members with social events such as dining out, midterm de-stressing, movie nights, and a day in Santa Monica. There are also Ukulele, Maori poi balls, and Tahitian dance workshops taught by other student choreographers.

Ultimately, the club’s main goal is to foster a friendly environment for people who are willing to learn more about Hawaiian culture.

Hawai’i Club has  engaged in UCLA activities such as Dance Marathon and Bruins Around the World. They perform for sororities and fraternities, as well as organizations such as UCLA Pacific Islands’ Student Association and other dance clubs. The club is occasionally invited to perform outside of UCLA as well. For example, they have danced for an ESL teacher conference in Anaheim. Through these activities, Hui O ‘Imiloa shares Hawaiian culture not only with the UCLA community, but also with the Los Angeles community.

According to Erin, Spring is usually the busiest quarter for the Hawai’i club because of their signature annual cultural show — Lu’au, which Is a $7,000 production. The Hawaiian Lu’au is traditionally regarded as a symbolic gathering that represents the dissolution of social divisions and celebrates the unity of a group of people through the shared experience of song, dance, and food. Expected to be held on May 12th at the Ackerman Grand Ballroom, this year’s Lu’au will be the club’s 34th cultural show. The door will be opening at 11, and the show will start from 12:30. Erin recalls that there are always people who expressed their desire to join the club after watching Lu’au, and she hopes to explore more opportunities for people to know about Hui O ‘Imiloa. “I really enjoy seeing people from different cultural backgrounds come together to learn something new”, Erin says, and “to achieve a common goal.”