‘Color Outside the Lines’: A Conversation about Campus Climate 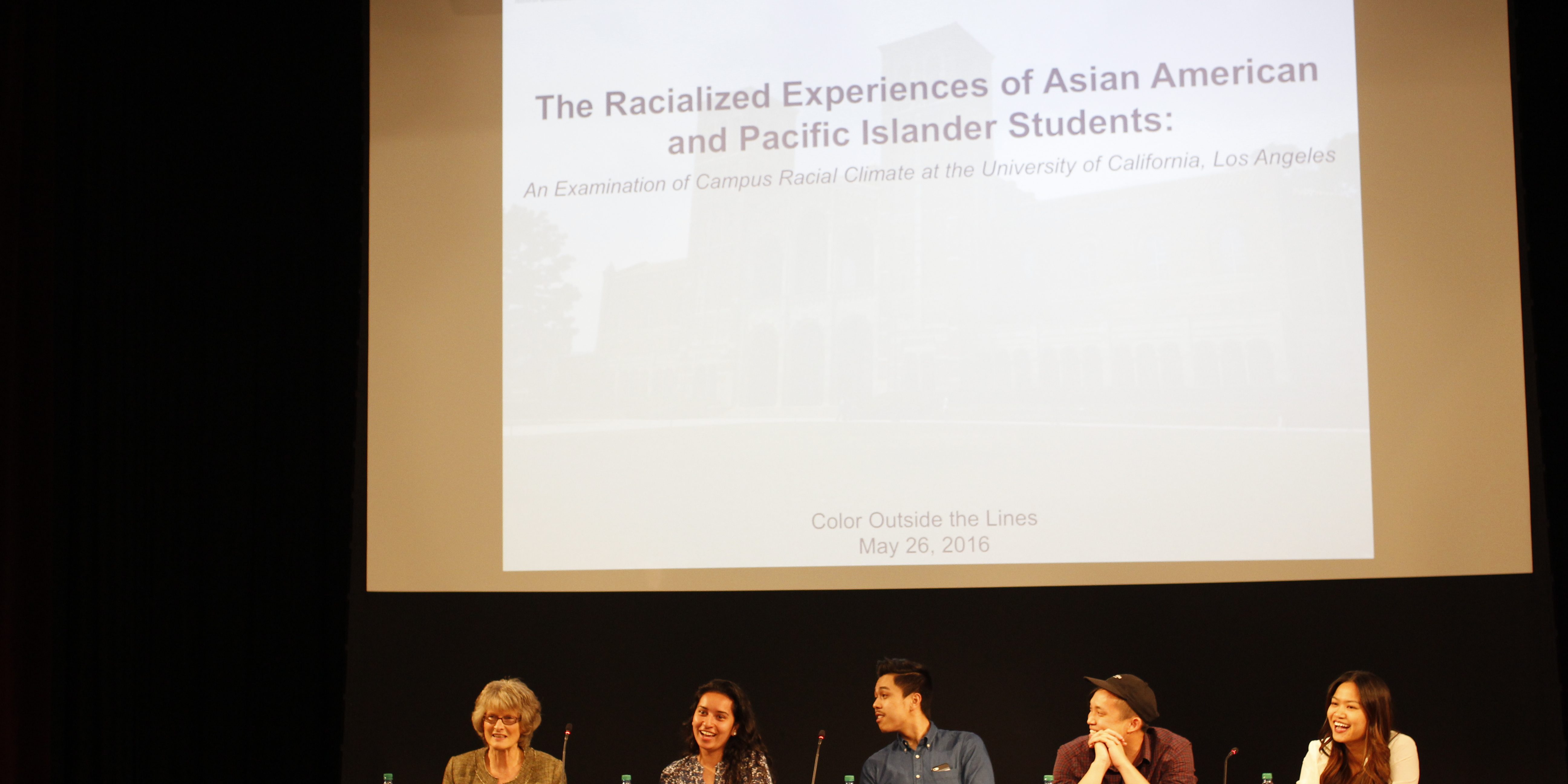 In celebration of Asian American Pacific Islander Heritage Month, UCLA Residential Life held their second annual “Color Outside the Lines” panel on May 26. Hosted by Faculty in Residence Dr. Robert Teranishi, the event was held “to discuss the fact that AAPIs are a relevant group to issues of race relations, campus climate, and how we think about student services and academic support at UCLA and higher education in general,” according to the Facebook event page.

The event began with opening remarks from Vice Chancellor Jerry Kang, who discussed the effects of the “model minority” myth and hate crimes against the AAPI community before turning the mic over to Dolly Nguyen, one of the authors of “The Racialized Experiences of Asian American and Pacific Islander Students,” a study done by the National Commission on AAPI  Research in Education (CARE) on the campus climate at UCLA.

In the study, various aspects of student experiences were covered, from students’ feelings of satisfaction with their academic experience to rates of participation in advocacy and performance groups. From looking into these experiences, one major finding is that the experiences of AAPI students parallel those of their Black and Latinx peers, which debunks the misconception that AAPI students “do not share the experiences of other racial minorities or in more extreme instances, are considered ‘honorary’ Whites.”

It is important to note that the data collected was disaggregated, which helps to recognize and shed light on the different and specific experiences and needs of each of the AAPI subgroups on campus. Nguyen finishes her presentation on the findings by proposing three main recommendations. Firstly, form cross-racial and cross-ethnic ties to “mitigate the persistent marginalization students of color experience on campus.” Secondly, use the disaggregated data to show the larger campus community the diverse experiences and unique challenges that each group faces. And lastly, offer financial and symbolic support to student organizations who serve underrepresented and underserved populations.

With the conclusion of the presentation, the panel itself began. This year’s panel featured speakers with different backgrounds and unique experiences, including Vice Chancellor Janina Montero, UCLA alumnus Justin Tan, and Jazz Kiang and Veronica Zamani, two students who are very involved in student activism on campus.

The first question was directed towards Montero and asked about her thoughts on the report. She confirmed that the findings of the research were right on point with what she has seen on campus during her time as the Vice Chancellor of Student Affairs. The experiences that she has heard of, including the sense of isolation within certain student groups, were quantified in the report, she elaborated. Montero stressed the importance of disaggregated reporting in order to recognize differences and address the needs of each group on campus.

The following question was for the two student leaders and asked how the findings resonate with the two individuals and how the data can be utilized. Jazz Kiang, a fourth-year Asian American studies major and the chairperson of the Campus Retention Committee, responded that the study put in writing things that have been known. There is a long history of student activism on this campus that has gotten the AAPI community to where it is now. For example, he explained how generations of students have fought to pass the diversity requirement, which passed just last year after three decades of activism.

The passing of the diversity requirement and the findings of the study are just small steps in opening up the conversation about the campus racial climate at UCLA. From here, Kiang proposed looking through an intersectional lens in relation to ethnicity, race, and class. He stressed the importance of protecting services that help students graduate from college, especially students from low-income backgrounds.

Veronica Zamani, a graduating political science major and the president of the Pacific Islands’ Student Association (PISA), expanded on Kiang’s ideas by mentioning the increasing visibility of the Pacific Islander community on the UCLA campus. This year, PISA held its second annual culture night and was also contacted to perform at many other events. Zamani pointed out that the PI population has grown to 0.2% of the campus from 0.001% just a few years ago, and she hopes to see an increasing trend in the following years.

The final question was for Justin Tan, a UCLA alumnus from the class of 2010 and a video producer at Buzzfeed. He was asked to elaborate on how diversity and the study are relevant off campus, specifically to his line of work in entertainment and media. He began by emphasizing the importance of representation, pointing out how there are so few Asian Americans on screen, and that these select few become responsible for representing Asian Americans.

The “Color Outside the Lines” program brought up very important points about AAPI issues on and off the UCLA campus. Through the pivotal findings of the study and the efforts of student activists, this “conversation” can be brought to the attention of the larger campus community, bringing recognition to the unique experiences and needs of the AAPI community.

Serena is a 3rd year physiological science major and Asian American studies minor. She loves to eat, travel, and say "hello" to dogs she meets in the street.