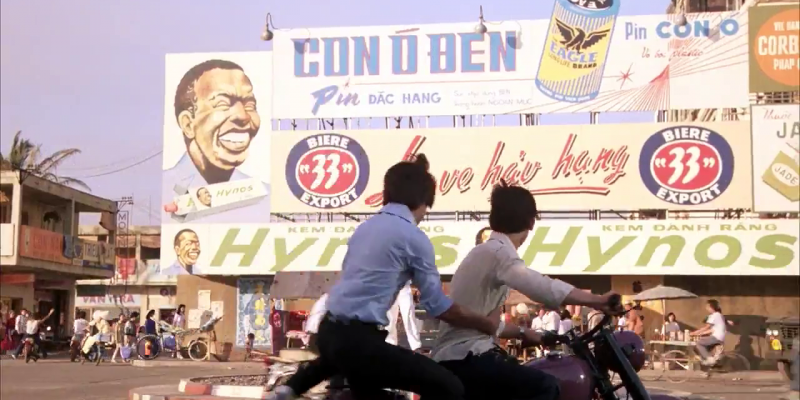 When Gunnery Sergeant Hartman said, “There is no racial bigotry here,” I knew that Full Metal Jacketwould make me want to throw up in disgust.

The film did not disappoint.

Ignoring the racial bigotry that does, in fact, exist in Hartman’s character, the first half of the film is actually an interesting examination of the effects of hazing and corporal punishment on recruits in the marines. It also examines the ways in which training for the marines emulates brainwashing and desensitization, resulting in a lack of empathy.

The infamous moment in which Papillon Soo Soo says, “Me love you long time.”

There we have the promiscuous API woman stereotype: the one in which the Asian woman wants to have sex, willing to do anything, with the white man. The stereotype has taken many forms, from Lotus Blossom to Miss Saigon.

What upsets me even more about this character, however, is that she is played by Papillon Soo Soo, who is half-Chinese and half-British! This casting decision only reinforces the idea that all Asian people are interchangeable with each other.

The rest of the film is peppered with other derogatory stereotypes and comments. In one instance, Sergeant “Animal Mother” reveals a dead North Vietnamese soldier, to which the war correspondent responds by taking pictures of the white soldier next to his dead body.

In interviews with the news crew, the soldiers say, “We’re supposed to be helping these people and they keep shitting on us.” There is no hesitation to throw around the racial slur that starts with a “g.” Another soldier conflates all the Vietnamese soldiers into one group: “I’m not real keen on some of these fellas that are supposed to be on our side. I keep meeting ‘em coming the other way.” And another: “We’re getting killed for these people and they don’t even appreciate it.”

None of these soldiers are Vietnamese soldiers. Throughout the film, the only voices that Full Metal Jacket presents are the voices of the U.S. soldiers.

The only times in which the Vietnamese seem to have a voice are when there is a sex worker involved, and the sniper at the end of the movie, who begs for a mercy killing. Undoubtedly, however, Full Metal Jacket reveals the one-sided bias of the Vietnam War, silencing the voices of the Vietnamese soldiers who were directly affected because of the destruction of their homeland.

A Vietnamese sex worker is presented to US soldiers for their enjoyment.

Full Metal Jacket is not the only war movie guilty of this, however. Most of the Vietnam War films released in the United States focus on the US perspective, choosing instead to discuss the effects of war on soldiers rather than the effects on the Vietnamese population.

This trend follows along with the nationalism and patriotism popular in every war the United States has ever participated in, of course. Instead of focusing on the “foreign” Vietnamese, it is in the best interest of Hollywood to focus on the experiences of those “on our side.” Patriotism draws in a wide range of audiences, from those who want to see a “glimpse” of what their loved ones might be experiencing to those who simply want to see violence actualized on the screen.

But the problem with Hollywood movies about Vietnam, and any other foreign country, is that they tend to freeze those countries in time. Instead of presenting Vietnam as an ever-changing country, with real people with real feelings and conflicts, Full Metal Jacket movies portray superficial stereotypes, spreading them to audiences everywhere.

Full Metal Jacket is considered a success among film critics. But it was also successful in mobilizing a stereotype, inspiring “me love you long time” jokes to this day, nearly twenty-five years later.

For a movie where one of the first lines is “There is no racial bigotry,” the movie has spread a lot of it.