You are here:
Bruin Bare Neccesities 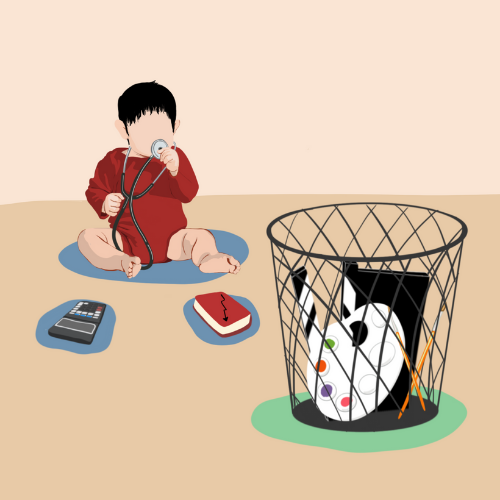 In the light of early adulthood, students leave childhood dreams behind and reach for more practical career paths. Often due to societal and familial pressures, many in the APIDA community gravitate towards jobs with greater stability and prestige rather than those closer to their creative passions.

Chelsea Tran, a first-year college student, had early aspirations for a position in the film industry. Her avid interest in film led to her involvement in her middle school’s theater crew. However, her goal of becoming a director was met with resistance: “When I told my parents about that and how I wanted to go to NYU for film school, they told me no, it’s really hard to make it in the film industry as an Asian.”

Kirsten Cha, a Berkeley freshman, faced similar challenges. Her early dream of becoming a clothing designer faced pushback from her family. “My parents never really let me pursue it as a career,” says Cha. “I haven’t taken any kinds of art classes. I’ve just been drawing of my own accord.” Over time, Cha has honed her artistic skills and developed her own distinctive style. However, she has shifted her primary focus to academics: “In high school, everyone’s taking AP classes so you don’t remember your dream. Everyone’s more focused on getting good grades.” Now that Cha is in college, she has cast art aside in order to prioritize her classes.

In the APIDA community, there is pressure for children to pursue “stable” career paths. Parents often warn against venturing into creative fields and instead encourage their children to enter fields such as medicine, law, and business. UCLA freshman Emmy Khuu says, “My parents are pretty supportive of whatever I want to do as long as I’ll be able to support myself in the future.” The parents of many APIDA students immigrated to America and prioritized earning a living, so their focus on financial stability reflects the experiences of their generation. With this financial stability in mind, Khuu is studying business and hopes to become a personal financial advisor. She is, however, open to other careers. “The reason I’m doing business is because the money is very stable,” Khuu states. “Any company needs an accountant to do the taxes.”

While job stability and family pressure play a part in selecting a career, the path towards a creative job has been narrowed not only by familial concerns, but also the industries themselves. Film has especially been problematic for its failure to include other races and ethnicities, especially the APIDA community. While recent efforts have brought stories like Crazy Rich Asians to the big screen, it remains difficult for Asians to enter the industry and become successful. “When you think of the film industry,” Tran says, “you think of white people.” The racial barrier makes film jobs seem unattainable and drives people to enter more inclusive fields. “Just because you have talent doesn’t mean you’ll be successful in the field,” Cha states, reflecting on the difficulty of making a living in creative industries. When representation of race is limited within an industry, it makes it difficult for people to enter. Much of the process relies on connections, and it is hard to obtain these connections in industries not open to APIDA representation.

The transition to college life often marks a separation between childhood dreams and career goals. Tran is now on the premed track while Cha is working towards an economics degree. Both individuals, however, still make time for their hobbies in their daily lives. Cha continues to draw and produce beautiful pieces. Tran enjoys watching many movies and TV shows—she highly recommends The Queen’s Gambit. While these hobbies are no longer a part of Tran’s and Cha’s career goals, they will always remain special to them. Tran’s and Cha’s experiences highlight the need for additional APIDA representation in creative industries, which will make these career paths seem more attainable to those outside the white norm.