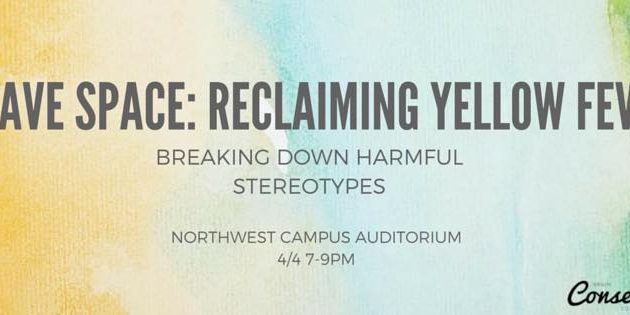 Bruin Consent Coalition, a student organization that promotes consent education and supports survivors of sexual assault, collaborated with UCLA Residential Life and The Word on Wednesday as part of their effort to create a safe space for people to share their personal experiences during Sexual Assault Awareness Month.

The event was hosted by Yong-Yi Chiang and Katharine Lee who chose this month’s theme.

The theme, “Reclaiming Yellow Fever,” came to Yong-Yi when she attended the Students of Color Conference at UC Berkeley in November. She hoped to expose the history of sexual violence by providing a space for healing and empowerment.

When organizing the event, Yong-Yi shared that the title “Reclaiming Yellow Fever” was met with opposition from ResLife.

The term “yellow fever” was thought to be triggering for Asian women, to which Yong- Yi replied, “I agree, it can be triggering. It is triggering to Asian women who continue to be hypersexualized and feel like they have to fit a certain beauty standard; it is triggering to the community it harms the most. In response, my co-host, Katherine Lee, and I were adamant that the phrase ‘yellow fever’” stay in the title, because we believed that it was necessary to directly address the issue and put a name to it, rather than shy away and continue to silence people from this community.”

“Reclaiming Yellow Fever” brought in a small and intimate audience. The co-hosts introduced Jessy Needham from the Center for Pacific Asian Family, which focuses on issues of sexual violence in the Asian Pacific Islander community.

The Center for the Pacific Asian Family also provided pamphlets covered with quotes from Asian American writers and basic resources for people who wanted to know more about sexual violence.

Jessy created a relaxed environment for the audience members by leading a grounding reflection. She invited the participants of the event to voluntarily close their eyes and imagine a color that represents their energies.

She then invited everyone to stretch out their backs. After the activity unwound the participants, the program presented Youtube video, “Why guys like Asian Girls,” by Anna Akana.

The video addressed the fetishization of Asian women solely because of their skin color. The event proceeded to showcase performances such as poems, freestyles and musical performances. Some performances were very personal while others were comedic. Themes dealt with issues of identity and society’s perception of Asian Americans.

Yong-Yi Katharine asked audience members to fill in words on how they felt yellow fever affected them and their communities.

Some were then randomly read out loud. Organizers of The Word on Wednesday also introduced their program that they host every Wednesday in Kerckhoff that includes spoken word.

The Word shared a collection of poems from their members’ diverse experiences.

Students Angela Yip and Karin Chan promoted “Not your Suzie Wong,” which is a closed Facebook group that provides an online space for Asian American feminists to post news and dialogue about the issues affecting them. The group, started by students Karin Chan and Kathy Pham, now includes close to 500 members since its launch last spring.

“Reclaiming Yellow Fever” ended with an informative Youtube video titled “Stereotypology: Submissive China Dolls.” The video referenced Edward Said’s “orientalism” and thus, the negative perception of the West on the East. The video taught viewers about the origins of stereotypical depictions of Asians.