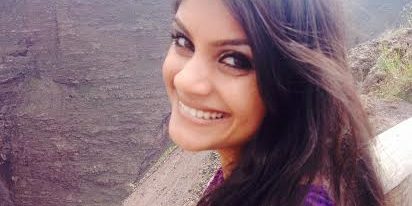 Ruhi Patil is the Financial Supports Commissioner. She is a third year biology major from Irvine, California who enjoys Bollywood dancing in her free time. Her boba drink of choice is honeydew milk tea.

How did you get involved with USAC?

I started off my freshman year in the presidential winternship. My first event was planning a rally for the men’s volleyball team. It was a great experience. I learned the ins-and-outs of USAC in terms of publicity, how to contact administrators, how to find a venue, and how to reach out to various organizations. This gave me a solid foundation of what USAC is and what exactly it does for students.

My second year, I worked in General Rep 2 as the director of cross-cultural events. I helped plan Holi, which was a huge success last year. In addition I planned an event called Namaste Shalom. This event brought out Indian and Jewish students for a night of dancing and allowed them in intermingle and have cross-cultural exchange. We learned that our cultures are similar. We have similar work ethics. It was great to mingle with students who I normally wouldn’t mingle with.

My junior year, I worked in the Financial Supports Commission under Heather Rosen. I spearheaded the initiative of the lab coat loner library. This program allows students to borrow lab coats for free. One girl I met told me “this was the difference between me staying in UCLA and me withdrawing from UCLA.” Things like these initiatives do make a difference in students lives, especially with rising tuition cost. From experiences like this, I see how the Financial Supports Commission makes a tangible difference in students lives. i decided to run and now I’m financial supports commissioner.

Why did you decide to join the Financial Supports Commission?

Has being an Indian woman made it more difficult for you to succeed in leadership positions?

I don’t think so. It has provided me with a unique experience that I can bring to USAC as I am also the IVP of the Indian Student Union at UCLA. I don’t think it’d been a barrier, it gives me the ability to voice the concerns of my community. I think it is great as two South Asian women are on council this year.

Many Indians do not consider themselves to be Asian American. When someone is talking about “Asian Americans,” do you believe they are referring to you?

Technically, yes, we are part of the category, but we have such a distinct identity that it’s more appropriate to refer to us as South Asians and people should use the word South Asians to refer to us.  I don’t mind being called Asian American. When you’re referring to Europeans, you can say Western European or Eastern European so I can see it as a broad term, but I think people should be conscious of who they are talking to if they are South Asian.

How has being a first generation American affected your college experience? Do you feel a need to balance Indian and American culture?

It has only enhanced my experience at UCLA. I think I exemplify being Indian American as I’m highly involved in the Indian community, but at the same time I’m involved in USAC, which has in the past been a white dominated organization. You really embody the balance that comes with being Indian American. I think I have the balance between the the two. My parents really emphasize my Indian culture, so I haven’t lost touch.

In the Daily Bruin article about election results, one comment read, “BU is filled with millennial white supremacists and people of color who feel it’s necessary for their individual success to subscribe to the idea of whiteness by any means necessary.” Why do you believe people feel BU only represents white students?

This election season was marred with drama and scandal. Do you think these scandals distract from the real issues?

Scandals aside, people should focus on the actual platforms of candidates and what they’re trying to do. Students can’t help but get distracted by all these scandals. At the same time that we have to tell people that these rumors aren’t true, we also have to ask people to focus on the candidates’ platforms and beliefs to judge them as individuals.

What are you hoping to accomplish in the next year?

I want to continue what we have done. We have an amazing initiative set in place already and it would be an injustice to not continue these initiatives that previous financial supports commissioners have accomplished. Initiatives like the iClicker loaner library, the textbook scholarship, and the parking scholarship. Things like that, but I also want to take a new approach on how we approach issues like financial literacy.

I want to create a monopoly themed fair where students who don’t normally come out to workshops are more inclined to come out and learn about how to take out a loan, what interest is, how a credit card works, as well as all the financial resources available to them. I want people to learn about these issues in a fun and unique way.

I want to create UCLA’s first class on personal finances to encourage students to think about their personal finances before they face problems later on after they graduate. I want to get students to be incentivised to take this class with UCLA units. I think that these two initiatives will help increase financial literacy in ways that haven’t been done before.

I want to encourage more Asian Americans to get involved with leadership roles. I know in the Indian American community, it’s a stereotype that we are “better behind the scenes” or better developing skills. I’m a pre-med student. I want to encourage students to break these stereotypes and reach out towards leadership positions. We have interesting thoughts and history. We have so much to contribute in leadership roles. Before this year, I was involved in a lot of pre-med groups such as TEACH and care extenders. This has been an amazing experience for me, and so I hope more Asian Americans get involved in leadership positions at UCLA.