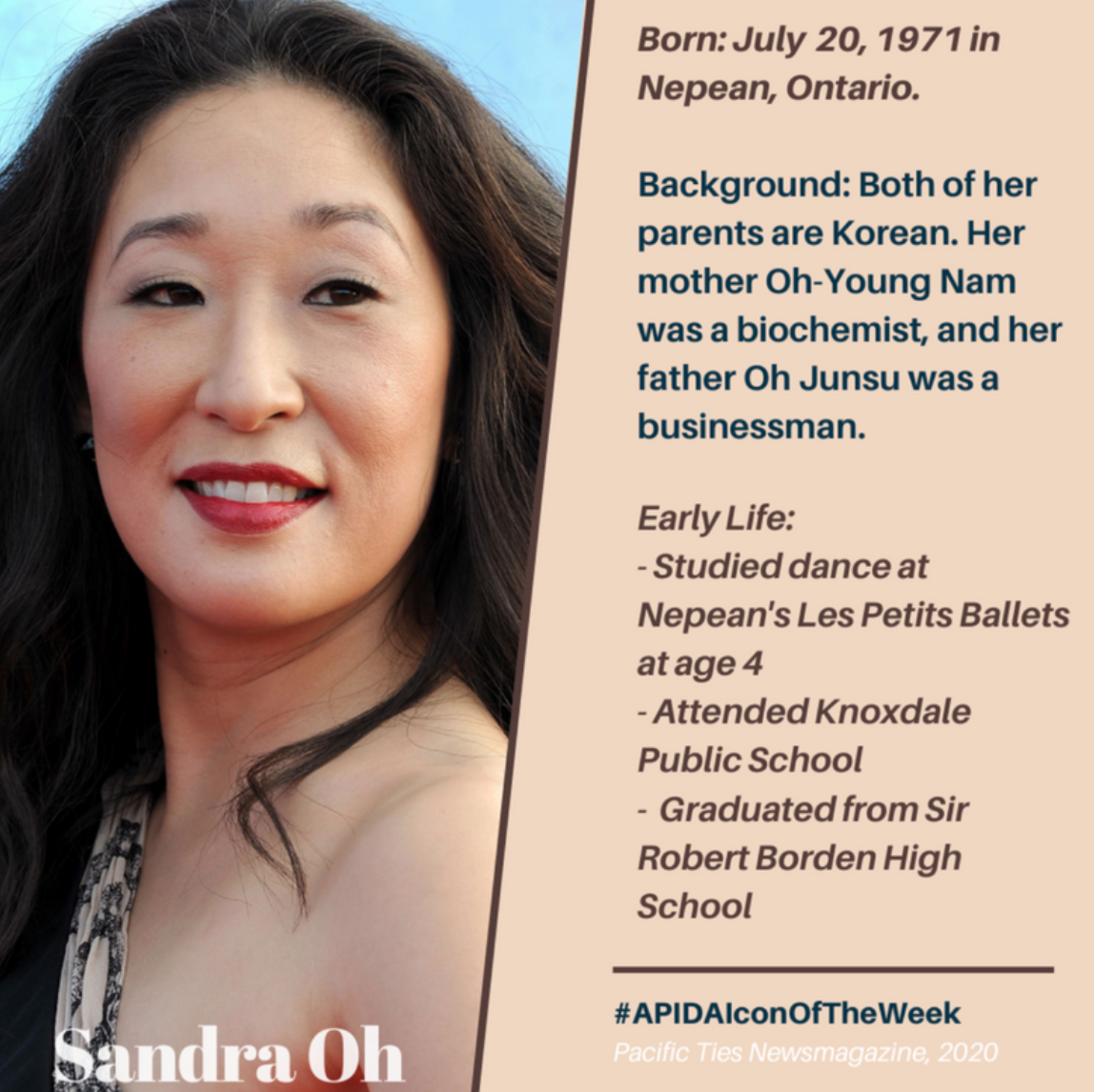 Q: Where did she grow up?

Sandra Oh was born in Nepean, Ontario to Korean parents on July 20, 1971. Her mother, Oh Young-Nam, was a biochemist and her father, Oh Junsu, was a businessman. She began studying dance at the age of 4 and attended Nepean’s Les Petits Ballets throughout her childhood. She also attended Knoxdale Public School and Sir Robert Borden High school where she first began to act in school plays.

Q: How did she get her start in acting?

Sandra Oh began informally acting in school and performed in multiple acting championships where she eventually won the national championship in the Ottawa Improve Games. Later on, despite the desires of her traditional Korean parents, she became determined to pursue an acting career. By the age of 15, she was able to obtain professional roles in theatre, television series and commercials. Oh received her big break with the lead role in 1993 CBC movie The Diary of Evelyn Lau. Her portrayal of Evelyn Lau earned her a Gemini Award nomination for best lead actress in a miniseries and proved her incredible screen presence and versatile performance abilities.

Q: What are her most iconic roles and achievements?

Sandra Oh is most iconically and affectionately known as Dr. Christina Yang, the brilliant and passionate doctor in the hit ABC medical drama series Grey’s Anatomy. She played Yang from 2005 to 2014 and from this role earned five Primetime Emmy nominations for Best Supporting Actress in a Drama Series. Oh’s character was one of the iconic leads of the show and aided in Grey’s Anatomy maintaining high ratings and excellent reviews. In addition to her brilliant portrayal of Dr. Christina Yang, Oh’s recent role as Eve Polastri in the hit show Killing Eve further demonstrates her incredible acting abilities. The critically acclaimed BBC America series depicts Oh’s Eve as a British intelligence investigator who is given the task of apprehending psychopathic assassin Villanelle, played by Jodie Comer. Oh’s talent shines through in her striking portrayal of Eve that calls for a balance of comedy and drama. Beyond these two iconic roles, Oh has played an aspiring actress in Double Happiness, a winery employee in Sideways and Patti in Under the Tuscan Sun. All of these roles earned her nominations or awards, once again proving Oh’s endless acting talent.

Q: How has she brought significant change to Asian representation in the media?

Asian Americans are often misrepresented or entirely ignored within the media but Sandra Oh has been able to work against the existing racism of Hollywood and the film industry to attain incredible roles. Oh has paved the way for so many aspiring Asian American actors through her astounding performances. She has also played a large role in altering the narrative surrounding Asian Americans in the film industry. The few roles offered to Asians in the industry are often tainted by tokenism or other forms of misrepresentation. Her career represents incredible achievements for the Asian community as she has been able to break out of the mold that the industry so often forces Asian American actors into. Her ability to portray dynamic and versatile roles in a variety of genres not only proves her incredible abilities, but also reflects the vastly ignored acting abilities of Asian American actors. Oh has spearheaded Asian empowerment in the media by confronting the current culture that excludes Asians from representation in the media. Sandra Oh is a shining beacon of Asian ability as she takes the lead in an imperative struggle within the media for greater representation for the Asian American community.

Q: What are the new projects that we can find her working on?

Sandra Oh is currently starring in Killing Eve, which is on its third hit season. In addition to her continued incredible performance as Eve Polastri, Oh is set to team up with on-the-rise rapper and actor, Awkwafina. The stars are working together to perform in a soon-to-be-titled sister Netflix comedy film. The film revolves around a lonely recluse whose life is upended when her wild sister becomes determined to fix their unstable relationship by helping her fulfill a lifelong dream of being a contestant on her favorite game show. Sandra Oh and Awkwafina’s new film offers another opportunity for positive Asian representation in the media.

APIDA Icon of the Week: Lapu, the Coyote that Cares Theatre Company
March 7, 2022