A Letter to Hollywood 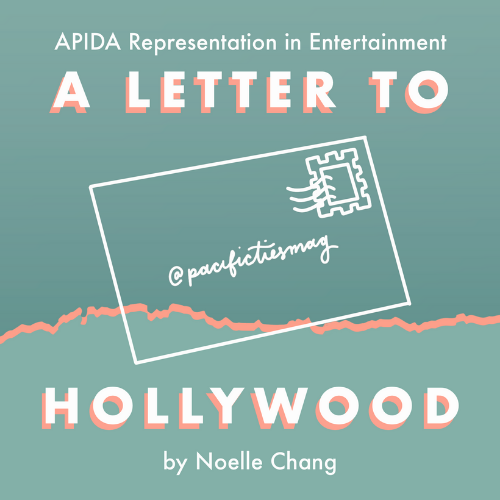 Why are Asian Americans not good enough for our own narratives? Why do you cast us aside? Or when you do finally give us a piece of the spotlight, why do you put us in a box?

Mickey Rooney. Scarlett Johansson. Tilda Swinton. Emma Stone. Benedict Cumberbatch. Katherine Hepburn. The cast of The Last Airbender. Marlon Brando. The list could go on. You have adored all of these actors, raised them up, and celebrated their craft. But when I think of them, I can’t help but cringe. Rooney’s portrayal of Mr. Yunioshi in the 1961 film Breakfast at Tiffany’s was shocking, to say the least: comical features barely containing buck teeth as he shouted out one of the worst, most exaggerated “Asian accents” I have ever heard. The use of yellowface to transform white people into a horrendous caricature of Asian stereotypes is a painful reminder that you don’t view Asians as good enough to portray our own stories. It invalidates the Asian experience and replaces it with a racist narrative. Although this racism may not exist in such a blatant manner as in the past, it still persists as a silent presence incorporated into many films today. Scarlett Johansson’s character in the 2017 Ghost in the Shell, was originally written as Japanese. Johansson was given the role and we lost another opportunity to see a strong Asian lead. Even when stories are designed to feature us, you push us aside in favor of playing into your whitewashed narrative.

With the few and far between roles available to us, that number shrinks doubly when you whitewash our roles. The resulting numbers are disheartening. According to a study from USC Annenberg’s MDSC Initiative, Asians only make up 3.9% of the characters in film. And although Asian Americans make up 5.4% of the population, only 1.4% of them are leads in studio films according to a study in 2014.

When you finally allow us into your films, it’s with a catch. You seem unable to look past your prejudices and see us as diverse leads. Instead, you whittle us down to stereotypes. Asian men are rarely given the opportunity to be leading men, and even more rarely are they allowed to be sexy. Asian men are more than capable of that but you reduce them to sexless character tropes that fit your biased ideals. Asian women are overly sexualized and subjected to the stereotypes of the cunning “dragon lady” or the docile “concubine.” The sexualization of Asian women is already such an issue in our society and you are guilty of perpetuating it. If we are not sexualized then we are portrayed as sexless. The trope of the “model minority” creates a soulless character that is only focused on quantifiable achievements. The character of the nerdy math geek or the mysterious foreigner leaves little room for any sort of character development. You maintain us as one-dimensional characters, designed to fulfill a specific role. Whether we are brought into the narrative as the token Asian or the butt of the joke, you continue to dehumanize us and perpetuate harmful stereotypes.

When I think about my childhood, I can only think of one strong Asian character that I looked up to. As a young Korean American girl, I wasn’t used to seeing anyone that looked like me in the media very often, and when I did, she was rarely the lead or a character to model myself after. The one film that I clung to was Disney’s Wendy Wu: Homecoming Warrior (2006), a cheesy rendition of the story of a popular girl whose life is turned upside down, except in this version, she is thrown into a world of reincarnation and Chinese mythology. She was beautiful, smart, strong, and athletic, everything that I wanted to be when I grew up. It wasn’t until years later that I found Christina Yang, an intelligent and strong Korean American surgeon, on the hit show Grey’s Anatomy. She was an incredible surgeon and loyal friend with her own romantic ventures and personal experiences. She was dynamic and unencumbered by exaggerated stereotypes. The fact that it took years for me to find another Asian character to look up to speaks volumes about the lack of representation.

The 2018 film Crazy Rich Asians was groundbreaking in its portrayal of Asian characters. The all-Asian cast excellently represented diversity in character type and exemplified emotional depth in their roles. And although the film was a huge success for Asian Americans, it’s still one of the very few positive forms of representation that we have. This is only the beginning; these examples are too few and far between. If you do not feel that you have the ability to represent us as humans, then you should hire those who do. I have only touched on those in front of the camera, but people who look like us, who truly understand our experiences are the key to creating diverse and honest stories. Diversity and representation are just as important behind the scenes as on the screen.

We have so much to share and give and yet time and time again you have chosen to ignore us.

I hope that this letter helps you to see us for who we are and where you have gone wrong. I want my future children to be able to look up at the screen and see themselves reflected back. I want them to be able to see themselves as the superheroes, the explorers, the princes and the princesses. I want them to live in a world where they are the main characters, not the sidekicks or the comic relief. I won’t glaze over the damage you have done, but now you have the opportunity to fix it. So please, Hollywood, do better.