You are here:
ARTS & CULTURECULTURE NIGHTS 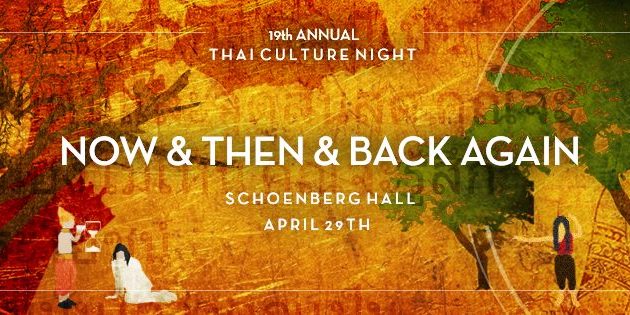 With Thai Smakom’s upcoming 19th annual culture night, Pacific Ties sits down with Derek Nguyen, the director of the show and Dennis Nguyen, the president of Thai Smakom, to discuss this year’s cultural show and it’s main theme.  This year’s show is called “Now & Then & Back Again” and will appear in Schoenberg Hall from 6:30-10:00 p.m.

Danial, Interviewer: What inspired the name of the Show: Now & Then & Back Again?

Derek, Director: A lot of times when you tell stories to people, you tell it again and again and the story spreads around. Because of that you get people talking about your stories and sometimes it makes its way around and it comes back to you–this happened to me. I told this random story once about how if you pressed some button at Costco, you get 10 cents, and next thing I know someone told it to me to see if I would believe it or not.

Dennis, President: It’s a lot to do with stories and replaying emotions. Especially love.

Danial, Interviewer: So kind of like replaying old VCR tapes?

D,P: Yes, exactly. I wanna look back at the old days and good times.

D,I: What do you most want to accomplish through this show?

D,D: A. Bring Thai folklore and Thai culture in the spotlight and give the Thai community something to remember. This show has united different communities on campus including the Chinese, Thai etc… and B. Honestly to share the love of storytelling because everyone loves storytelling–the theme itself is storytelling, how it can shape our lives and how we view it.

D, P: It’s the Thai Club. So I don’t know if you can tell but my ethnicity is not Thai and I’m the president of the Thai club.

D,P: Yeah, so I’m Vietnamese. But I really care about Thai culture. I try to spread it as much as I can. I have that passion in my heart for it. I really feel like TCN (Thai Cultural Night) is a great way to get involved with cultural events. I was just working as the sound guy when I started out. But the way everyone just comes together to make something through acting, dancing etc… is what I fell in love with. You’d think you wouldn’t be friends with so many people and then you end up forming this tight-nit group. That’s the thing, though–I’m not Thai and I love this.

D,I: So when I read the description for the show–the bit about it being a story within a story, within a story–I thought of the Russian Babushka doll. Is that the kind of effect you were going for?

D,D: To a degree. I actually haven’t thought of that in terms of the plot. My idea is of a story, with a story, within a story, but my point is you get to see how stories affect other people and how they are retold over and over again. Main symbol is a circle because it gets retold. The big theme is the hero’s story–everything can be devolved down into the same structure and hopefully I was tackling the story structure and circular essence of storytelling.

D,P: I thought of it more like inception, but I totally see where you’re coming from. I actually think that’s a better way to think of it. As viewers, we understand a lot of why certain things are said. Like, one character says “I know you” and the other replies “I don’t know you! How do you know me?” And so the first half is representative of that. We as viewers understand all of these stories as they are all interconnected, like a circle in a sense.

D,I: Will the show be mostly English?

D,D: Completely English other than some Thai terminology. All the names are Thai, but the dialogue is English.

D,P: I’d say 98%. Obviously we are trying to appeal to the wider demographic and so we use English, except for when we name historical figures. I cannot put subtitles on stage. And so if anything is said, like “Nang Tani,” and people are like “what is that?” it’ll be explained soon after it is mentioned. Like, oh, it’s a banana spirit.

D,I: Oh that’s great! The last culture show I went to they were speaking a lot of my native language, which was nice and all, but at my table it was just me and my White, Latino and Indian friends who were just immensely confused. So it’s good that you guys are doing that.

D,P: Yeah, I get that. Like, we want people to be culturally curious and interested and not to alienate them instead.

D,I: What is the general theme you are going for?

D,P: Storytelling. It’s a story about storytelling. And you can apply this to your life in my personal opinion. You know, sometimes like bad things happen and sometimes you’ve gotta keep those bad memories with you, but at the same time you’ve got to move on. There’s a character who hates the world after something happened to him. Our other protagonist helps him learn not to lash out and that he has to live on in place of those who can’t. That’s something I have felt through the play.