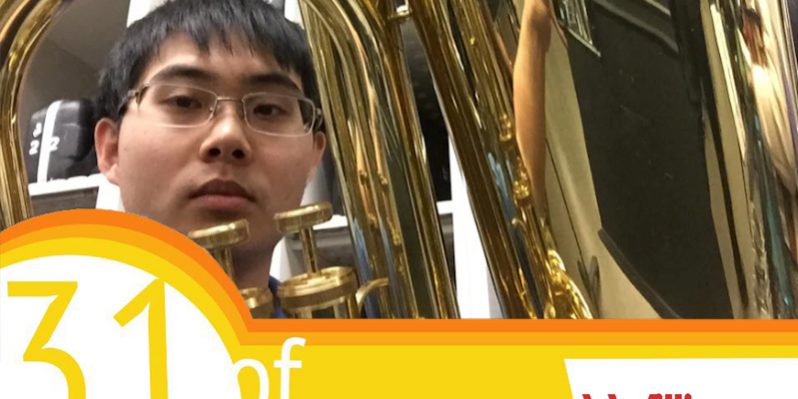 William Hsu is a second year in the UCLA Teacher Education Program working on his Masters in Education after earning his B.S. in Applied Mathematics from UCLA in 2014. He will be graduating this June with an M.Ed. William currently teaches Calculus and Pre-Calculus at The School of Arts and Enterprise in Pomona, California.

Tell us about your identity and heritage!

I identify as Taiwanese-American.  My family comes from KaoHsiung (mom’s side) and Ki-Long (dad’s side), though my dad’s side also has some roots directly from Shanghai.

What are you passionate about and why?

My passions are math, education, and Jesus.

Math isn’t really what most people believe it to be.  Society says that it’s about calculations and doing more complicated calculations and all that stuff.  That’s like saying that music is only about the notes you play but the meaning behind the notes and cultural significance is completely ignored.  In short, math is about seeing relationships between things and parameterizing them in a quantitative and logically consistent manner. For myself, as a Christian, I believe that math is the language that God has given us in order to fully understand the entire universe itself.

Education in America is pretty bad.  I’m part of the UCLA Teacher Education Program, a program focused mostly on social justice in the classroom.  To me, that means providing not just equity and access to historically disadvantaged students, but also supporting the furthering of their skills and abilities.

I’m working in a Title I school (mostly low-income/working class families) right now, teaching the seniors.  I’ve noticed that if I don’t show them exactly what steps to take, then they can’t do things.  It’s not about intelligence, it’s about the culture of “just do what I say and don’t question it” that they’ve grown up with.  Education research has shown that in Title I schools, students get a very basic level of education, where they are fed rote processes with very little explanation as to why they’re even doing what they’re doing, except that the end goal is to graduate and go to college. But…why is graduating and going to college important?

My personal mission is to bring more of the “why” to students.  I want to develop the skills necessary for them to really succeed in the workplace and real life, so they can achieve the dreams and aspirations that they and their families have for themselves.

I’m a Christian.  Growing up, I really didn’t understand it since the Chinese church isn’t always that good at communicating what the Gospel means to the American-born generation.  I was just told that “Jesus died for me”, but had no clue why He had to die and what “sin” really was.  It wasn’t until I got to college where I explored this and had real experiences with God.  For the purposes of not making this way too long, I won’t go into detail with it, but I do believe in the spiritual realm and how God did “so love the world, that he gave his only Son, that whoever believes in him should not perish but have eternal life.”

It’s interesting, too, that I’m a math teacher/mathematician, and people ask me about why I’m able to be a Christian and be so passionate about math, something that is purely logical.  Well, I honestly see them as intertwined and that many of the less talked about fields of mathematics can directly even showcase the beauty that God has created in the universe.  Take the study of chaos theory.  Why do things occur the way they occur?  In chaotic systems, initial conditions are vital to how things will play out.  Small changes will cause significant impacts on the timeline of the world.  (Think time travel paradoxes: one small change will alter history, you know, that whole thing.)  To make a long story short, I’ll leave it at this.

Some of my favorite memories would be my summers as a New Student Advisor.  I met so many wonderful people and learned so much about other people, about the education system, about my passions in life.  It’s a really rewarding experience, where I could make a real impact on the lives of hundreds of students coming into UCLA, some knowing exactly what they want, some not knowing anything except that they’re Bruins for life.

Another set of favorite memories would be going to Catalina Island with InterVarsity for our “SummerCon” (conference right after school ends).  There’s just so much that happens there that it’s hard to really condense it down to a brief description, but I can say that I’ve met God there every time I’ve been there.  During musical worship times there are actually the only times I’ve cried during my six years at UCLA (people who know me know that I don’t cry, just because it doesn’t happen).

I also enjoyed being part of the HOOLIGAN Theatre Company pit orchestra for my 4 years of undergrad.  I met lots of fellow musicians, learned how to play 5 instruments within the same show, and learned how to conduct a pit orchestra! The Broadway pit orchestra has always been something I’ve wanted to be a part of, so I treasure the opportunities for me to be able to be part of it during my time here at UCLA.

What’s your favorite part of your culture?

Currently, I’m in my first year of teaching.  My goal, as stated before, is to bring about change in the education system here in America by working from the inside out.  Because it’s my first year, it’s easy for older teachers to dismiss any ideas that I have about improving understanding, in favor of the more comfortable “traditional” methods of teaching.  It’s challenging trying to change something when people can easily pull the experience card on you.

As I’m graduating from UCLA a second time this year, I just want to say…Go Bruins!