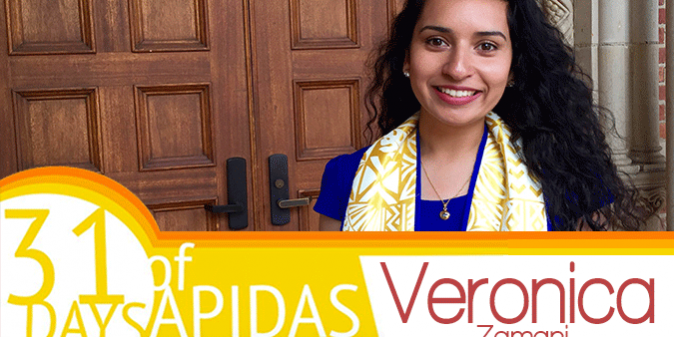 Veronica Zamani is a fourth year majoring in political science and minoring in public affairs and education. She is the president of Pacific Islands’ Student Association (PISA).

Tell us about your heritage/culture.

I’m half Tongan and half Iranian. I’m proud of both of my ethnicities and family histories. I’ve only been involved with the Pacific Islander (PI) community at UCLA though. I was drawn to PISA during my yield admit weekend. Through my classes, I learned about how policy affected my family and the trends that affected my community.

I came to UCLA because of PISA. But it’s funny because Los Angeles has the highest concentration of Iranians outside of Iran. We are so close to little Persia and Iranian things at UCLA and so it’s interesting that I’m surrounded by a lot more Iranians than I’m used to. That contributes to why I’m more comfortable with my Iranian identity. I learned Persian for two years. I took classes about Iran, politics of the Middle East and Islam. So my academics focused on elements of my Iranian identity—yet with extracurricular activities, I was engaging my PI side.

What are some challenges you’ve faced?

I never talked about my socioeconomic status until I came to college. I live in a suburb and a house. People think that because of this, you’d have money. But poverty is easily concealed in the suburbs. I went to a low-income school so most of us got free and reduced lunch, but within that, you didn’t know what the financial situation at home was—it’s a spectrum of poverty.  Coming to UCLA and recognizing my socioeconomic status was a big shock since I was around people who had a lot more money than I was used to. It felt weird recognizing that my life was much different than people on my floor in the dorms or in classes. So I felt like the poor Brown girl in those spaces.

What does community mean to you?

The first thing that comes to mind is family. At UCLA, my family has been PISA. The value our community upholds the most is respect. The second value is loyalty to the community first and foremost. Everything we do as PISA is for people outside of ourselves. It’s never out of self-interest or else we wouldn’t be doing service work. Whatever benefits the most amount of PIs in the community is what gets done. We understand that it’s so rare for us to be here and that we have to give back as much as possible for the people who aren’t here.

We are less than half a percent of the student population. PISA knows most of all PIs on campus, I’d say 85%. Our communities are small in general so knowing someone’s last name (Samoans and Tongans) says a lot. The community network is very tight knit. We are small and not visible but you can guarantee that there is at least one PI athlete that comes to UCLA each year. Knowing one PI athlete gives us the opportunity to know other PI athletes.

How do you feel about the Social Justice Referendum passing? What service does the outreach program, Pacific Islander Education and Retention (PIER), provide?

The reason why I support SJR is because of my belief in PIER and the work that we do. We are the smallest outreach program. We have only four staff including our project director. That compared to the other programs is a huge difference. PIER is PISA’s baby in that it’s the thing we will always protect and rally around because it has to do with getting more PIs in higher education. We provide that mentorship to students who were in our shoes, whether it’s culturally or the things going on at home as well as academic problems. We have students who are at risk of failing their classes but also other students are high performing. We meet them where they are at to help them achieve high school graduation first and foremost, then college entry.

How does your activism intersect with your Mormon identity?

In the Community Programs Office space, I’m known as a nerd and square Mormon. Whereas in other social circles of mine, I can be categorized as the progressive or the gangsta. The way people perceive me is different depending on the environment—although I’m the same person in each circle.

There’s a sizeable Latter-Day-Saint population at UCLA, undergraduate and graduate. Culturally, our church group isn’t diverse. We have a few Asians, Latinos and several Polynesians. It’s predominantly white. I would say that it’s evident when our politics clash. Typically, it happens between the Brown girls and everyone else. I think it has to do with our cultural backgrounds. The way people talk sometimes rubs us the wrong way because what they say may come off narrow-minded or stereotypical. But my religion is the thing I hold closest to me. It’s been important for me to be involved and do the church things concurrently with my other involvements. Their political leanings are often shaped by their race and income status, so I wouldn’t say that it’s because they’re Mormon—it’s not the church or the teachings but rather the demographics in the US.