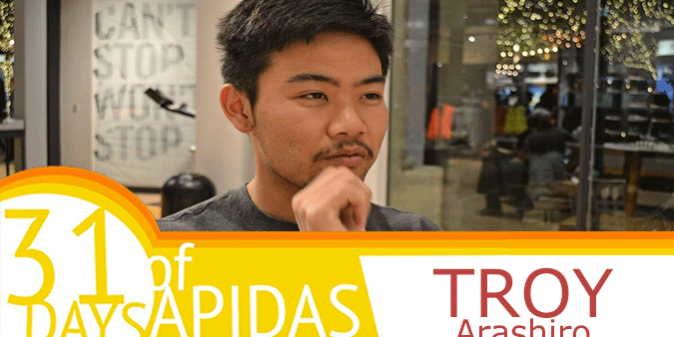 My name is Troy Arashiro.  I am currently a third-year transfer Chemical Engineer here at UCLA.  I’m from Irvine, California, but I moved to California from Hawaii in 2010.  Over here I live in Gardenia Hall, which is where you’re likely to find me studying or invading (with permission) people’s rooms.

I am half Japanese, one quarter Chinese, one quarter Okinawan.  I tell people that I am Japanese because it makes things simpler.  Because of my Okinawan identity, however, I look a little bit different. My parents are also born and raised in America, they learned English as their first and only language, but it’s funny because people speak to my parents and don’t expect them to speak perfect English but my mom speaks better English than I do. But they still grew up with a mixed culture, my mom and dad are definitely familiar with cooking Japanese and Chinese food and know about some of the holidays but they really identify as Americans.  My mom is half Japanese half Chinese, my dad is half Okinawan and Japanese.  A lot of people think that Japanese and Okinawan are the same, but I like to differentiate it because I think there’s a big difference.  If you watch Karate Kid, it exposes Okinawan culture, the scenery, we look different, the food’s different, so my dad does different things.

There’s the easy reason, which is that I could graduate UCLA in two years. I was considering UCI, but it was three years so it’s nice to save money. Also, I like that UCLA emphasizes giving back to the community, like there’s a very big social justice atmosphere here. I wanted to get a bigger perspective here, especially because I’m a south campus major. If I went to UCI, UCSD, they’re very much focused on the sciences there and sometimes, you know, you just learn how to crunch data, solve algorithms, and perfect research, but UCLA offers a more diverse, more balanced education.

How do you think your identity affects your experiences at UCLA?

When other people see me it’s easy to assume that if I’m Asian and especially here, that I’m part of the new wave of immigration, they ask me about when I moved here to America, if I speak Japanese, or stuff like that, but it’s weird because I consider myself very American. I grew up here; it’s all I ever known, so when people ask me stuff like that, it’s kind of awkward because I don’t know anything about Japan.

Are you in any student groups on campus? What are some of your experiences?

I’m currently a part of just mainly engineering clubs, so the one I spend the most time with is the American Society of Civil Engineers (ASCE).  And it’s funny, because it’s a club outside of my major but I joined it because it had a cool project and it’s one of the best clubs I ever joined because it’s very social.  There are community service events, professional events, project events, where, you know, you get to build things. [It’s a] very good bonding experience, and I’m glad either way that I joined it, even if it’s not my career path because it helps with hard work.  I’ve been working on an environmental design project where we try to find optimal solutions to treat water contaminants.  There are other clubs I joined but I rather highlight some of the smaller ones such as the CalPIRG, which is the California Public Interest Research Group. When I was a part of them, we helped protect the plastic bag ban in California, which imposes a tax on plastic bags, and a lot of the companies wanted to appeal it, so we were trying to petition city hall to keep it, and I was spreading awareness by annoying people on Bruinwalk and calling people.  It was an interesting experience being on the other person on Bruinwalk.

What’s your favorite part of your culture(s)?

As much as people will say they hate the idea of the melting pot of America, I do consider myself as American.  It’s an interesting story. My Chinese grandmother and Japanese grandfather got married during the 1950-60s, and that was a very weird time for people in that era, especially in the aftermath, or I guess, the after-fillings of the war. So when they got married in America, that wouldn’t help them anywhere else but in America [because post-WWII Chinese-Japanese tensions would have made the grandparents’ marriage controversial in their respective home countries]. That’s what I like the most, that we all come from a variety of different places and backgrounds, and the best part is that  people bring parts of their culture, not only their dress or their food or like their customs, but their mentalities as well.  There’s a lot of mentalities that go along.

My greatest challenge right now is probably figuring out what I want to do after I graduate.  Everyone is always saying you’re studying engineering, you’ll be fine, but things are changing. Even if I find a job, I’m not sure it would be what I want to do. I really want to pursue a career that employs technical skills to solve humanitarian problems like the global lack of potable water, or renewable energy.  However, how you can get involved in those careers is very broad.

What’s your favorite memory of UCLA?

I don’t know, it’s hard to say a favorite memory because a lot of things blended together, just the fact of the craziness that comes along with going here.  During fall, I would wake up around 5:30 AM to get up for work, after I would have four hours of class, and after that I would run around, maybe get something to eat, and I’d go to one or two club meetings.  I would be tired when I get back but it’d be never ending. I would have late night talks with different people, coming here, just talking to people and seeing their perspectives, especially late at night, different things come out.

I still want to see the UCLA and USC game next year, but I’m sure I’ll cross it off.  I still haven’t gone iceblocking yet, and I was supposed to go tunneling sometime.