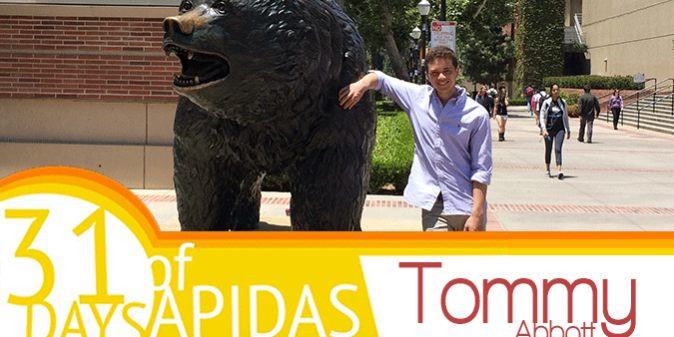 Tommy Abbott is a third year biology major from San Diego who one day hopes to be President of the United States (#Abbott2032). In the meantime, he is interested in management consulting.

I identify as white, Black and Vietnamese. I actually did not know I was Black until I was 15 years old. My mom didn’t know her dad. We previously thought she was half Native American, half Vietnamese. I was Googling my maternal grandfather’s name, gave him a call, and found out I wasn’t Native American at all: I was a quarter African-American. My mom immigrated from Vietnam, and her father, my grandpa, was in the Air Force, and had no idea that my mom existed. My mom is visibly Black, but in the 1970s, coming to America at that time, there was definitely weird image of a Black girl in a Vietnamese household since interracial marriage still wasn’t fully accepted, and biracial kids were still quite rare at the time. At school, she was viewed as a “fake,” where a lot of the other Black kids at school would bully her for having light skin and coming from an all-Vietnamese family. She didn’t look like her siblings, or her mother, and her dad was nowhere to be found. My grandma never told my mom that she was Black because she was being bullied by the other Black kids.

How does that compare to your experience growing up as a mixed person?

Very different. I was never bullied for my racial background. Since my mom was being bullied for her skin color, I felt that she rejected that skin color at a young age, and decided to project herself as full Vietnamese. I mean, she also didn’t know: she looks visibly Black, but she didn’t know that she was half Black. When I was being raised, I didn’t know I was Black, which led me to believe I was half-white, half-Vietnamese, even though neither my mom nor I look remotely Vietnamese. Fast forward to 2010 when I discovered I was Black. I wouldn’t say my whole life was changed because of it, but I definitely thought it was cool that there was a unique part of me that I newly discovered. Culturally, I was raised Vietnamese. I was raised by my mom, and since she was Vietnamese, I was raised Vietnamese. For example, we ate rice with every meal. So I did want to see the other side of my culture.

Four months after discovering I was part Black, I decided to go out and visit the Black side of my family in Philadelphia. I was immediately greeted with open arms, even though my skin color was completely different from theirs. And it turns out, they’re also half Asian too because my grandpa ended up marrying a Thai woman. And my grandpa went blind in the early 2000s, so he’ll never know what his daughter or I look like, but it doesn’t matter to him because he was just happy that I wanted to seek him out.

I just transferred here from UCSB. I feel like I haven’t done anything cool yet. I went to Santa Monica and Venice for the first time last week. My bucket list would be to connect with other students like me. For example, I just found out there was a Mixed Student Union, and I’d like to join the Vietnamese Student Union too and also the Afrikan Student Union. I guess the reason I haven’t joined any yet was because I feared the rejection, not fitting in because of my mixed ethnicity and because I look white. I fear the skepticism from the groups, like “Do I belong?” “Do I identify enough?” and I think that stems from seeing how people were telling my mom she wasn’t “Black enough” as a kid.

What are you passionate about and why?

This sounds really cliché, but because of my different racial backgrounds, I’d like to do work that contributes to unifying the US. Ultimately, I would like to be the President of the United States. I don’t want my kids to go through the same feelings I have currently when I want to join a group, when people question what I say I am. #Abbott2032

When someone tells you they’re mixed race, but they don’t look like what they’re saying they are, it’s worth it to believe them. Just because someone doesn’t appear as what they identify as, doesn’t mean you shouldn’t believe them.

Interview has been edited for length and clarity