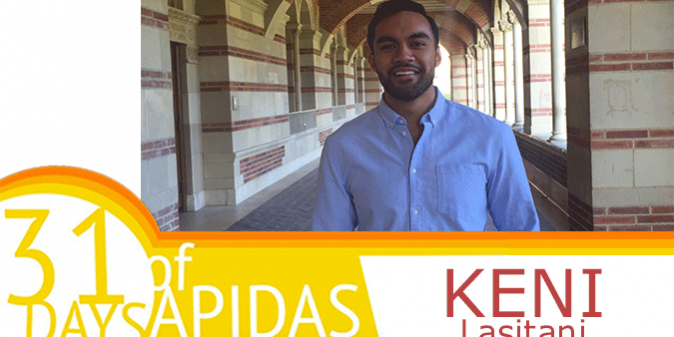 “Being a male, Pacific Islander, and not an athlete hasn’t been too big of an issue for me. There are a lot of people who think I play sports on campus. Right after high school I was driving and this cop pulled me over. As I was taking out my ID he saw my BruinCard and was surprised I went to UCLA, and not as an athlete. He was so curious he asked what my GPA was, and what I scored on the SATs.”

Tongan, LDS (Latter Day Saint)/Mormon, I was born in New Zealand and not yet an American citizen. I have been a legal resident since 2007.

How long have you been at UCLA?

I started the year 2010-2011, then I took 2 years off to serve a voluntary mission for my church. I came back in 2013 and have been here since. I will be graduating this quarter with a B.S. in Molecular, Cell, and Developmental Biology.

When I applied to colleges I didn’t really know what schools to apply to. I had heard that UCLA had a good medical school and did a lot of research, and knowing that I wanted to be a doctor I decided to apply, but I honestly didn’t know UCLA was that great of a school. My older siblings did not apply to schools in California either so I chose schools that my friends in high school were applying to. For me, it came down to BYU and UCLA. I decided to go to BYU because I thought it would be the best for me in terms of church and my mission. Instead, my mom chose UCLA so that’s why I’m here.

How do you think your identity affects your experiences at UCLA?

I was more aware of being Mormon coming here. I  know UCLA is a very liberal school, but there’s a congregation for UCLA students here so that helped. Initially it was difficult living in the dorms freshman year because everyone wanted to party, and I was like, “I’ll be here and let me know if you need me to pick you up,” but I eventually found a good group of friends where I could be myself.  As a Mormon I cannot engage in drug use, alcohol consumption, consume coffee or tea, and engage in premarital sex. Before UCLA I wasn’t in touch with my identity as a Tongan. I grew up around other Asians and Filipinos. I wasn’t aware of the fact that Pacific Islanders are categorized with Asian Americans. I also did not know about education and health disparities in Pacific Islander communities.

Are you in any student groups on campus? What are some of your experiences?

What’s your favorite part of your culture(s)?

The food, how family-oriented it is, and dance. This past PAC (Polynesian Arts and Culture) night was the first time I ever danced, it was a Tahitian dance.

Being first-generation and pre-med. There are no other pre-med Pacific Islanders that are guiding me because most of them are first or second years. I’m basically doing everything on my own. My parents provide financial, emotional and moral support, but they don’t know much about what it means to be pre-med and there is no pre-med major at UCLA. All these factors contributed to why I started Pacific Islanders for H.E.A.L.T.H.  because I didn’t want Pacific Islanders who are pre-med to feel the same way.

What’s your favorite memory of UCLA?

It was to get into cancer research. That’s been a struggle and finally in my last year I’ve been able to get into a lab. Starting a new club was also on my list, which is what i did. The Pacific Islanders for H.E.A.L.T.H. club was started this fall. On my list was also to go to a football game, which I did; go to a USC game, which I did not do; but I did go to the BYU/UCLA football game.