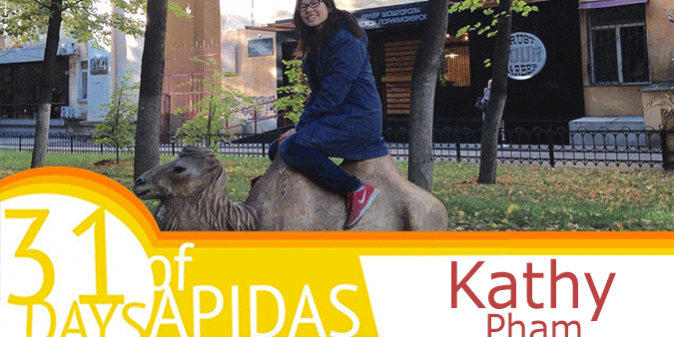 My name is Kathy Pham. Incoming fourth year for undergraduate, currently taking a year off abroad. My pronouns are she/her. I study Geography/Environmental Studies and Russian.

How do you identity?

Vietnamese American on my dad’s side. It’s the one of dominant cultures that I grew up with in East Side San Jose. However, I’m still trying to figure out who my mother is and get in touch with her. I haven’t seen her in almost 15 years. If anyone has any leads, let me know (seriously!).

I always called myself Asian, expecting that the American part was assumed. However, I realized not everyone will automatically come to that conclusion. I remember one of the first times when my identity was questioned. Five years ago, several American high schoolers and I visited one of the oil capitals in Siberia. There our eyelashes nearly froze off in the cold, while we petted reindeers, passed by oil rigs and snow-mobiled across the taiga. Reporters from the local news station approached us for an interview. They asked the other Americans their opinions on Russian culture. Unfortunately, when it was my turn, the reporters looked curiously at me. Uncertain if they wanted to film, they said that it was impossible that I could identify as an American since I didn’t look like a “typical” American.

With this language barrier between us, I was frustrated and embarrassed, feeling powerless that I could not adequately justify my existence. Why did I feel the need to defend my identity? Looking back, I wish I didn’t take it so personally. Perhaps, those folks just didn’t see people like me on TV. Considering how popular Hollywood is, I hope in the future there’s more representation of minorities in this industry, so we can have our stories told not only in the US, but worldwide.

Tell me about your travels. Has studying abroad impacted the way you see the world?

I’ve been to Italy, Kazakhstan and Russia. It’s given me a chance to learn several languages and see how people live outside of the US. I learned that there will always be topics of debate when interacting with people from different cultures, but there’s also common ground. Even if we’re wearing different garments, dancing to different music or drinking different alcohol (or not), nearly everyone is just trying to find their own happiness. But none of us is quite sure how.

What is “Not Your Suzie Wong” and what does it mean to you?

Irritated about the geisha girl, dragon lady, and Madame Butterfly stereotypes of Asian women, Karin and I created this Facebook group called “Not Your Suzie Wong.” It’s a gathering of Asian-American feminists and allies who are committed to creating a more diverse and multilayered representation of Asian America. Sometimes we discuss issues that affect our community, such as beauty standards, media stereotypes and cultural-generational gaps. Other times it’s more lighthearted things like supporting our peers’ cultural event or comedy performance. Personally, this group reminds me that technology can be used to do amazing things like bridge people across continents and share amazing news stories.

Book, song, and/or movie that strongly resonates with you right now and why?

Snowpiercer. How can you not watch it and think of Plato’s cave? It talks beautifully about class struggle and challenging the status quo. Also, Elysium. Besides for entertainment value, these movies can be great for starting discussions about socioeconomic disparities. In both films, you start to wonder how desperate conditions can drive people to do amazing, difficult and sometimes impossible things. You start to root for the hero, even though you know very well that they’re breaking the law and order of things.

My UCLA buddies each have their own inspiring story, so I’d want to say thank you to them and hang out more before they all graduate. I’d also like the spend the next year trying to find a job where my team is filled with awesome people and so I can afford to live in LA following college.