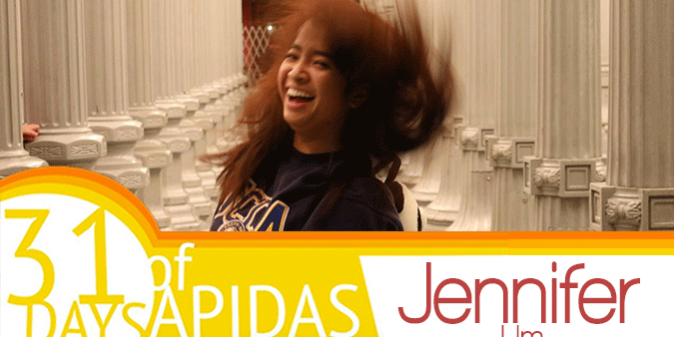 My name is Jennifer U. and I am a third-year environmental science major. Pastel colors are my favorite.

How do you identify yourself ethnically?

I identify as a second-generation Cambodian-American with a good amount of Chinese and a little Vietnamese in me.

I am very involved as Internal Vice President of United Khmer Students. We are the Cambodian cultural organization on campus and we focus on bringing awareness of the Cambodian community both inside and outside of UCLA through socials, networking with other Khmer orgs in schools that are part of the Khmer Student Coalition, our annual culture night, and the Khmer Outreach Retention Education (KORE) program that pairs high school students from low income communities with a UCLA student mentor. My favorite experience with UKS involves all the late night practicing we do every winter quarter to perfect our culture night. I am also involved in the Renewable Energy Association, SWC Earth, and CLICC.

In terms of career goals, I am still as lost as ever. I would like to either get an MBA and work in resource management, get a Masters in Information Technology and become an IT Manager, get a Masters in Urban Planning and work as a city planner, or work as a copy writer. In terms of extracurricular goals, I want to continue working with the Cambodian community in southern California and possible join the Peace Corps after graduation to give back to the world that has given me so much.

I love studying in between the columns at Royce because I get to see everyone going on with their day and the wi-fi is actually amazingly fast.

I am from the San Fernando Valley. I grew up in a predominantly Hispanic community and the only Cambodians I knew were my relatives. I used to commute to school but I recently moved into an apartment closer to school.

The funny thing is, UCLA was never part of the plan. I decided to check off UCLA on the UC application the last minute, thinking I wasn’t going to get in. I initially wanted to go super far away from home because my parents were relatively strict in high school and I wanted to live my life a little. I was super surprised when I found out I got in but I immediately accepted. My first year was a struggle and I seriously considered transferring because I was commuting and I felt so distant from everyone and I felt like everyone was so much smarter. But living at home made me realize how family oriented I really was. So many UCLA students are so far from home and don’t get to see their family often but I was blessed enough to see them every day. Becoming an intern for the Asian Pacific Coalition and for UKS and working with the great people in these organizations helped me define my identity as an Cambodian American and as a leader, and as a result of that I grew more confident in myself and my abilities and it was only then that I realized I belong here. UCLA isn’t perfect and I’m not perfect but we’re perfect for each other. I am so thankful that UCLA admissions believed in me.

I just want to go to Fat Sal’s. In my three years here so far I still haven’t gone to Fat Sal’s, believe it or not. I also want to save the world, somehow, but it’s all about baby steps first.

What cultural events do you participate in? Are there cultural festivals, practices, or traditions specific to your ethnicity that you practice?

In addition to all the UKS shenanigans that I’m involved in, I also celebrate Khmer (Cambodian) New Year with my relatives in Long Beach. For those who don’t know, Long Beach has the biggest population of Cambodians outside of Cambodia. A lot of Cambodians relocated to a lot of different places around the world as refugees after the Khmer Rouge era ended in 1979 and Long Beach became home to many through word of mouth. Within my family, I would also say that the food is the biggest tradition being passed down from one generation to the next. There’s nothing that compares to my mom’s sour soup and nothing that compares to making savory and sweet rice tamales with my grandma. I hope one day I’ll master Khmer food as they have so that my children will know the taste of Cambodia.

Any advice for the UCLA freshmen?

Freshman, DO WHAT YOU LOVE. I changed my major at least five times trying to make my parents happy. I struggled so hard and lacked motivation in classes for majors I didn’t really want to be in. But you only have one life to live. DO WHAT YOU LOVE and do it well and YOU WILL MAKE IT.