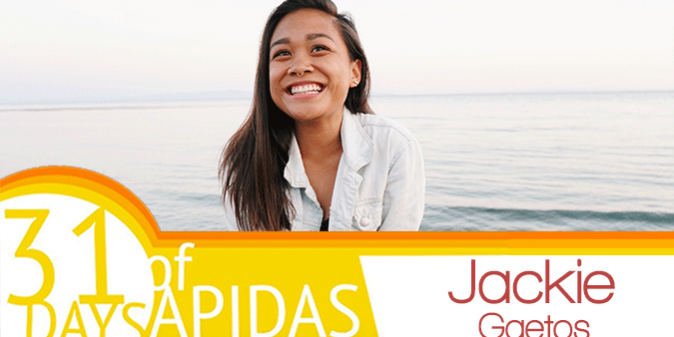 Jackie Gaetos is a fourth year studying sociology who identifies as a queer Pilipina-American. She is the the president of Samahang Pilipino.

I’m from Salinas, CA. Salinas is known as the “salad bowl” because there’s a lot of agriculture. It also has a bad reputation of gang violence. Close family members were in and out of jail. My cousin that was close to me was involved in drugs and gangs since middle school.

When I first came to UCLA, I remember my friend and I were shocked that people walked around at night and even during the day. You just didn’t do that in Salinas.

Tell us about your witch doctor grandfather.

Growing up, my parents didn’t talk about their upbringing, but they told small stories about mythological creatures and scary stories about how my grandpa was a witch doctor in the Philippines. They told me that my grandpa was approached by a lady in white and gave him these powers, and said, if you used the powers in a bad way like taking money, someone is going to die. He did take money four times, and four of my aunts and uncles died—my grandpa’s children died. My mom would tell stories that he healed people. My mom would hear demonic voices in the next room, where my grandpa performed exorcism on them. I do believe in it. There has to be some truth in all stories.

Professor Lucy Burns reached out to you and co-programmer Pernell Quillon for Samahang Pilipino to program an event called, “The Asian Persuasion: An Open Mic On Asian Pacific Sexualities,” on April 12. You performed a spoken word by using material from past journal entries.

The prompt that my friend gave me was, “Start with the last text message that you sent to the last person you loved.” It brought me back to the last relationship that I was in. My last relationship was with a girl. In the piece, I wanted to add the struggle of being with someone who wasn’t comfortable with themselves because of their sexuality, religion and family. And how it affected our relationship and took a toll on me too. It was an intense part of my life. I felt so relieved writing this piece because it allowed me to reflect on it and see how much I’ve learned to love myself again because I had lost myself.

What drove you to become president of Samahang Pilipino?

Before joining Samahang, I didn’t think about my identity of being Pilipinx. Then I did the SPACE and SPEAR internships. I learned about the Delano Manongs, and found out some of the strikes were in Salinas. Why didn’t I learn about Pilipinxs in Salinas and what all the Manongs did for us? They put their lives on the line for future generations. Pilipinxs are so badass but you don’t learn about that. You don’t hear about historical figures being Pilipinx. So I thought to myself, this could be us, on campus.

What is your experience as an Asian American woman in a leadership role?

It’s hard. Especially as a woman, our voices are expected to be quieter than men. I feel it in some spaces where it’s dominated by men. Sometimes my voice gets drowned out, which is frustrating because I’m the president. My working style is collaborative. I want to hear what other people think.

One of our values is “one family.” When I was running for president of Samahang, I heard that people felt like their voices weren’t being heard by leadership. I think that’s why I value my leadership role of being collaborative. Samahang isn’t just one person. It is one family. Everyone’s experience as a Pilipinx is different.

What are some of your APIDA role models? Why?

I met my SPEAR mentor, Deniza Sabio, during my first year. She was a positive role model for me. She went through a lot of shit with personal issues, school, family. At the end of the day, she was super positive and optimistic to me. When I’m going through something tough, I think about her strength, and it motivates me to keep going. She started off as a biology major but decided to do design media arts later on.

Emily Bautista, the Samahang Pilipino president in 2009, is just so badass. During her year, she helped advocate for the PLEDGE fee and organized people to pass the concentration in Pilipinx Studies. She motivates people and is a very strong Pinay. She always talks about loving herself when we bring her as part of an alumni panel. If you love yourself, then you love your community.

Note: Some edits have been made since this Q&A was published.