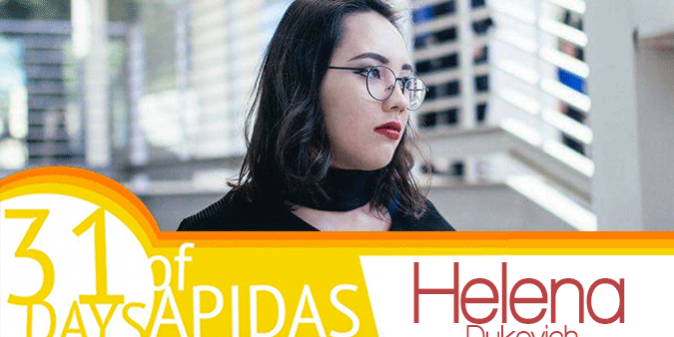 Helena Dukovich is a first year from the Washington DC area who identifies as mixed.

How do you identify ethnically?
My mother is first-generation Chinese (from Hong Kong) and my father is third-generation eastern European (Croatia and Slovakia), but currently I would call myself a mixed Chinese American.

Before college, I lived in McLean, Virginia (about a 10-15 minute drive away from Washington DC) all my life. Coming to LA wasn’t really culture shock, but it’s very different from the DC metro area. I miss having actual seasons.

I don’t think I can pick just one, but Cantonese food is my favorite food overall in terms of region. I also like matcha-flavored things and cheese.

Why did you choose to come to UCLA?

After freshman year of high school I decided that I wanted to pursue East Asian languages and/or studies in college, and UCLA’s Asian Languages and Cultures department was the largest and most comprehensive one out of the schools I researched. I was especially excited about the Linguistics and Asian Languages and Cultures major because it was so specific to my interests. Even though now I’ve decided to change my major, I still think UCLA was the best school for me academically out of the ones I applied to. I also wanted to go to school in a city different from the area I was used to, and so far I’ve learned a lot and had a lot of fun in UCLA and Los Angeles because there’s more diversity and so many opportunities to go to all sorts of events or cool places in the area. I also got really excited when I first found out that UCLA has a dining hall just for Asian food.

How did you get involved with the MSU?

I actually found out about Mixed Student Union from Gareth Wang, who was featured previously, when we first met as ACA family members. I was really excited because I had never had in-person access to an organization that was specifically meant for people of mixed ethnicities, race, or culture. Even after attending just one meeting, I felt like I had found a space where I was completely comfortable and could relate to everyone in the room; at first it was nice just being able to talk to peers that had gone through the same struggles as me and could help me learn more about myself, but the other members are also great people in themselves and inspire me to work harder. Unfortunately in the past two quarters I’ve had other commitments that are time-consuming and keep conflicting with MSU events, but next year I’m definitely going to commit more time to MSU because I want to take advantage of this opportunity and help contribute to make it better if I can.

How did you get involved with ACA?

I signed up for ACA at orientation because being part of a cultural organization was the extracurricular activity I wanted to do most in college. I didn’t know what to expect, but I was lucky to meet great people right when I joined that made me want to come back to future events. ACA has now become my biggest commitment outside of academic work. I’ve met most of my closest friends in ACA and I’ve learned so much from working with staff and peers through the internship program. I’m really thankful from everything I’ve been able to experience because of ACA.

What are some other cultural organizations are you a part of?

I’m also a member of Hong Kong Student Society and Korean American Student Association, and even though I’m not very active in them now I’m glad I joined and went to events in Fall Quarter because it helped me meet people that are my friends now.

What are some goals you have for yourself for the rest of your UCLA career?

Whatever activity I’m doing, whether it be academics or not, I hope I can perform in a way that I can be proud of. Even if I don’t achieve the best results or the ones I wanted, I hope that I can learn to be more efficient and always try my best.

What are some APIDA-specific issues you are passionate about?

This might be a bit unusual, but I started learning about some issues that affect Asians and APIDAs because of Korean pop culture. For example, a lot of Asian countries see having lighter skin as a sign of beauty, and in Korean (and other countries’) cosmetics there are products specifically meant for lightening your skin, and it’s not uncommon for celebrities to be criticized for having “dark” skin. I’m passionate about colorism and fetishization of Asians, whether it be for the “exotic china doll” image or the more recent hypersexualization/idealization of mostly East Asian males related with the Hallyu wave/spread of East Asian pop culture.  I tend to focus on these issues because they’re less well-known or talked about, and I’ve seen so many examples of them in Asian countries and among APIDAs and their families. Even though these issues may be more prevalent in the countries they originated in, they still affect APIDAs, and I hope people can become aware of them and not normalize these beliefs.

How do you think UCLA could improve in terms of being more culturally sensitive?

I think a lot of people still hold onto cultural stereotypes, consciously or not, because when you’re in such a big place with so many types of people it can be comforting to try to figure out certain groups; stereotypes don’t have to be a bad thing, but the problem is when people think of them as absolutes or assume that someone of a certain culture is going to be the same as that stereotype or other UCLA students of that same culture. I think it’s also important not to make someone’s culture their defining feature; culture is always significant, but culture isn’t necessarily tied to ethnicity or race, and there are other important characteristics or values that individuals have besides culture that you can get to know them by.

What is your favorite place to study?

I like the group study pods in YRL or any floor lounge that’s very quiet and clean.