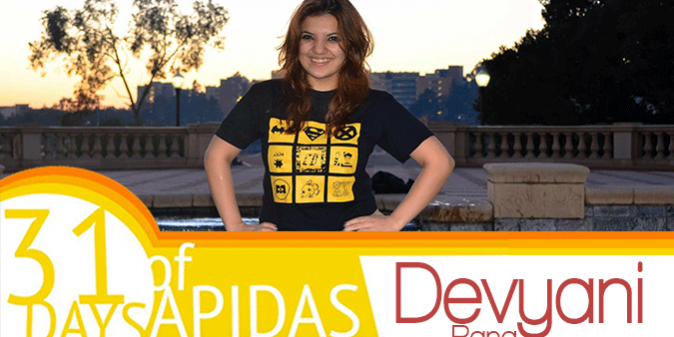 Devyani Rana is a fourth year majoring in Economics and minoring in Film, Television and Digital Media. She is an international student who identifies as Indian.

Jammu and Kashmir is a contentious area to grow up in because it sees conflict between India and Pakistan. It’s a border state. Parts of Kashmir are with India, Pakistan and China. That’s where the contention arises because currently there is dissent among the people of Kashmiri identity, Pakistan and India. The “Kashmir” issue is often conflated with people’s nationalities and cultural identities.

Growing up, we did have a lot of terrorism, which thankfully has gone down in recent years but that didn’t shape my childhood even though that goes with the stereotype of growing up there. I traveled a lot around the world early on so that helped me always maintain the perspective of the difference between politics and people to be able to rationalize how our nationalism shapes us but doesn’t necessarily shape our interactions with other people. My interactions with people are bereft of the assumption that I’m supposed to be in conflict with them.

How did your parents influence your decision to come to UCLA?

I’m here at UCLA because of my parents. I have never been said no to anything that I’ve ever asked for in terms of my education. When I decided to go halfway across the world, I’m sure they must have freaked out. But they never questioned it. They came here two weeks before I came here for freshman year and still can rattle off names of Westwood shops because that’s how much they tried to learn about UCLA. I think them being supportive of each other has provided me a strong support system and allows me to follow my passions to whatever extent I want.

My dad came to the US as a Paul Harris scholar at Harvard. Coming to UCLA was a natural thing to support because they didn’t have an option to say no—my dad came here. I think I have big shoes to fill and I don’t think I would want to do what they’re doing just because I know how good they are at the work that they do. Not being able to live up to that would be such a shame.

You worked on the photo series called #EndtheStigma under the USAC Office of the President Devin Murphy and Student Wellness Commissioner Savannah Badalich, which got featured on Buzzfeed and HuffPost UK-Youth Voices. You were also part of a team to film two PSAs and two music videos. Why are you interested in mediamaking?

I stumbled into filmmaking almost by accident. I put my writing skills and my friend’s cinematography skills to make a PSA, which ended up winning the UC-wide “End the Silence” category of the competition. It was part of the “Directing Change” competition. At that point in time, we didn’t think much of it. We were content with the cash prize we got out of it. But we soon figured out that they wanted to fly us out to Sacramento to lobby for mental health and an award ceremony. What we didn’t know was that they would host us in a bougie hotel and have limousines pick us up. We got to talk to Bradley Buecker and learn about his experience on Glee and American Horror Story. There was a green carpet and they gave us our awards on stage. I still have my first trophy for film. After that, I came back and I took my first film class. Then eventually enrolled in the minor.

I’m currently working on a script that I hope to send to the Cannes Film Festival next year and I want to start a web series with friends but those are all long-term plans.

Why are you interested in advocating for mental health issues?

Mental health has always been important to me. It’s something that I can advocate through visual media platforms. I know that mental health problems are very stigmatized in my society, and coming to UCLA a lot of us face mental problems but not many people talk about it. I personally have gone through situations that involved a cancer scare, losing a few friends and family members over the past four years, and the general struggle of being an international student away from home. Many of these instances have been very stressful and I truly believe that had it not been for my friends and the occasional CAPS visit, I wouldn’t have been able to deal with so many things especially since I am so far from home.

You’re graduating! What are some hopes and fears?

I think the beauty of graduating is that you slowly realize that you have so many more responsibilities than you originally anticipated but there are few thousand students at UCLA going through the same thing as you are. Transitioning out of something familiar is never easy but as long as you have your “ride or dies,” you will be all right.

My general annoyance is trying to figure out my work visa. As an international student, landing a job is only the beginning of being able to work in the US. I’m also kind of concerned about where to store my hammock in the summer.