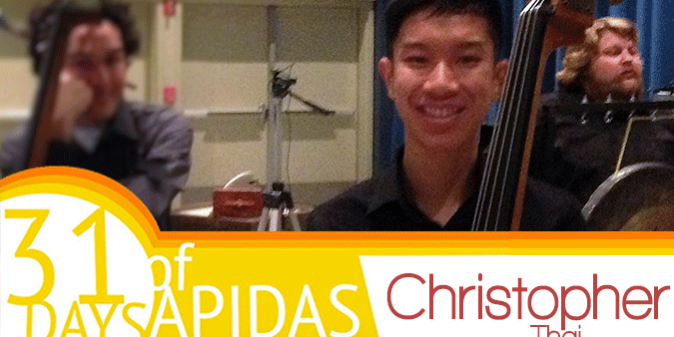 How do you identify yourself ethnically?

UCLA Symphony and UCLA Game Music Ensemble. I play the double bass, so I play in both of these music groups on campus. UCLA Symphony is hosted by the music school here and features non-music majors who want to continue playing large-scale symphony works. GME is student-run, and so it’s a lot more laid back. We just had our spring concert last Sunday, and it was an absolute blast!

Club Track Field: Recently started this quarter, since I ran cross-country in high school. Gotta stay in shape you know!

UCLA Dota: During Fall and Winter quarter, I was a part of one of our e-sports teams. Playing Dota 2 competitively after playing the game for years was definitely very fun (though we kinda sucked, but oh well!)

I’d say my more memorable experiences are from hanging out with fellow GME members. We get really close with one another, and hang out a lot of times, like go out to the movies or watch the LA Philharmonic.

I want to work in the industry when I graduate, either with the big companies like Google or whatnot, or work in startups. Recently, I’ve been taking interest in game design, so that’s definitely out there. As for extracurriculars, now that I’ve kinda decided what I want to do in the future, I should probably join ACM or IEEE sooner or later, the EE and CS clubs at UCLA.

Usually I study in my dorm, but otherwise I study in Powell mainly (or CS TA office hours on the lower floor of Boelter)

When I was receiving college acceptances, I had narrowed my choices down to UCLA, UC Davis with a Regents Scholarship, UCSD, and Purdue. I wanted in-state tuition, and I felt like I’d enjoy my next 4 years in the middle of LA a lot more than if I had gone elsewhere. Right now fortunately it feels that way!

Go do things in LA (like hiking Hollywood or kayaking in Marina del Rey). Engineering and the workload it entails doesn’t really allow for that recreational kind of stuff sadly, and I don’t think I’ve seen enough of LA yet.

What cultural events do you participate in? Are there cultural festivals, practices, or traditions specific to your ethnicity that you practice?

I feel like I don’t embrace my Vietnamese heritage as much as I should, but it doesn’t bug me too much. I’ll still call my family and say to them “Chuc mung nam moi” whenever Tet, Vietnamese New Year comes around, and I’ll still respect my mother’s trips to the temples in San Jose to honor my grandparents, things like that. I’m proud to call myself Vietnamese, it’s just I don’t involve myself too much in our traditions.

Any advice for the UCLA freshmen?

Time management (especially if you’re taking a high number of units), and don’t stress over terrible grades. Don’t ever get behind on your work (I know, sounds obvious, but it really is a pain in the ass to pull an all-nighter doing the work you procrastinated on). At the same time, don’t be overly obsessed with the grades you get or how many points you got on a certain exam. As long as you’re learning, you’re already rewarding yourself, and a couple bad grades isn’t the end of the world. Leave some time to chill and don’t focus on school 24/7.